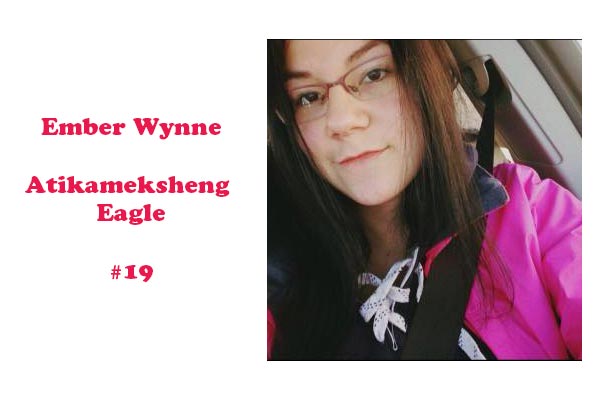 The West Parry Sound OPP reported that at approximately 8:19PM on March 18, a van exiting Highway 529 in Magnetawan First Nation drove into the path of a tractor trailer on Highway 69.

Two passengers from the van were also transported to hospital with life-threatening injuries.

Anishinabek Nation Grand Council Chief Patrick Madahbee, along with Little Native Hockey League tournament organizers express their deepest condolences to the Red Rock First Nation families who lost their loved ones yesterday while travelling home from the tournament in Mississauga.

One of the three fatalities was Bantam player 13 year-old Ember Wynne.  She was picked up for this year’s tournament by the Atikameksheng Eagles.

The Atikameksheng Eagles team staff says, “We are saddened to hear of the passing of our defensemen #19, Ember Wynne.  Ember was a great addition to our team and she connected with all the girls.”

Ember herself had said to coaching staff after winning their second game while beaming ear-to-ear:  “This is such a great day!”

The Atikameksheng Hockey Association sends their condolences to the family.

“This is a terrible tragedy,” says Grand Council Chief Madahbee.  “The kids play their best, have fun, make friends and then something like this happens.”

Little NHL Vice-President Chico Ralf, in charge of the girls division, says his heart goes out to the families.

The theme of the 44th Annual Little Native Hockey League tournament is “We are all Stars” and saw 178 teams participate.   The Little NHL is built on the foundation of Sportsmanship, Citizenship, Education and Respect.

NetNewsLedger extends our thoughts and prayers to the family and friends of the deceased.