“Having 20 communities come together to own a major infrastructure project at any one time is truly unprecedented,” said Margaret Kenequanash, Chair of Wataynikaneyap Power. “Our communities see the value of controlling infrastructure development in our traditional homelands to ensure responsible development while maximizing benefits to our communities. I would like to welcome both Sandy Lake First Nation and Wabigoon Lake Ojibway Nation as partners and shareholders in this unique and exciting project.”

“It is an honour to join the other First Nations on this very important and much needed infrastructure project,” says Sandy Lake Chief, Bart Meekis. “Grid connection will bring many benefits to our community including the opportunity to develop renewable energy projects.”

“My community is pleased to be a part of Wataynikaneyap Power and to provide our support to the communities in the north,” says Wabigoon Lake Ojibway Nation Chief, Paul Watts. “A project of this magnitude will have a positive impact in the lives of First Nations for generations to come.”

Further progress on the project was made as the Ontario Minister of Environment and Climate Change, the Hon. Glen Murray, approved the Amended Terms of Reference for the new transmission line to Pickle Lake environmental assessment (EA). The approval, a key milestone for the project, now permits Wataynikaneyap Power to enter into the EA stage of the process. The Amended Terms of Reference provides the framework for the EA studies and community engagement.

The Wataynikaneyap Power project has been identified as a priority in Ontario’s 2013 Long Term Energy Plan. The Ontario Power Authority (OPA) estimates the current cost of supplying power to remote communities at $90 million per year and growing. Ontario electricity ratepayers and the federal government subsidize most of this cost. The OPA estimates grid connection would result in approximately $1 billion in savings compared to continued diesel generation. Grid connection would also generate significant socio-economic benefits for the region and communities.

About Wataynikaneyap Power: Wataynikaneyap Power is a First Nation-led transmission company, in partnership with Goldcorp, aiming to design, permit, construct, own, and operate a new transmission line in Northwestern Ontario that will bring grid-connection to remote First Nation communities currently powered by diesel generation. Continued use of diesel generation to power First Nations communities is financially unsustainable, environmentally risky, and inadequate to meet community needs. 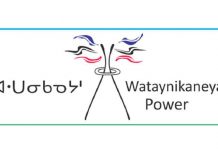