OTTAWA – The New Democrats have joined the Green Party in opposing the Conservatives new Anti-Terrorism bill. “Terrorism is a real threat, and public safety must be the priority for any government. But we cannot protect our freedoms by sacrificing them,” said Mr. Mulcair. “We have a responsibility to stand up for our values and to never allow these cowardly attackers to change our way of life,” states NDP leader Tom Mulcair.

In a statement the NDP say they have identified several serious problems in C-51, including that the bill will give broad new powers to CSIS without enhancing oversight, that it includes provisions that could impact legitimate dissent, and that the government has not produced any plan to counter radicalization in Canadian communities.

“This legislation is sweeping, dangerously vague, and likely ineffective. The Conservatives have played politics and intimidated the Liberals into giving them a blank cheque to pass any law, even one like C-51 that goes too far,” added Mr. Mulcair. “Canadians can count on New Democrats to take a principled stand for our rights and freedoms.”

Charlie Angus, the MP for James Bay Timmins states, “The recent terrorist attacks have shocked the world and united Canadians. When Parliament was attacked, MPs stood together across party lines to show that this House will not be intimidated”.

“But instead of leadership, Mr. Harper is pushing legislation that will impact all manner of civil rights and liberties. He has intimidated the Liberals into going along with his agenda. New Democrats will not allow anyone to bully us into giving up the freedoms that are at the heart of our democracy. Terrorism is a threat but Canadians don’t have to choose between their security and their rights – this is Stephen Harper’s false choice. We will stand for a better vision,” adds Angus. 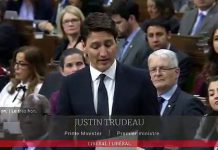