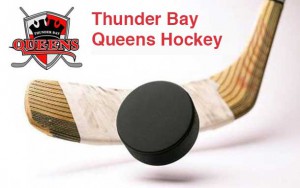 DULUTH, Minn. – The Thunder Bay RBC Dominion Securities bantam AA Queens are off to the championship contest of the St. Luke’s Icebreaker Invitational in Duluth.

There they will meet the Stillwater Ponies at 3:30 p.m. Sunday in the title game.

Thunder Bay wrapped up round robin play Saturday with a pair of victories to finish 3-0.

They began with a hard-fought 3-2 decision vs. Edina Green and followed that up by clipping the Faribault Falcons 9-0.

Against Edina, the Queens jumped out to a 2-0 first period lead on goals by Karadyn Kiviaho and Allyson Lesperance.

Edina battled back to knot the score at 2-2 after two, but Kiviaho’s second marker of the game with 8:02 remaining proved to be the game-winner.

Josée Robinson finished with 17 saves to record the win in net.

Against Faribault, Thunder Bay stormed out to a 5-0 lead after the opening stanza en route to the romp.

Brynne Lambert chipped in by doling out three assists while Vanessa Nicholl had a pair of helpers.

Makenna Burke picked up her second shutout in as many starts for the Queens.

They began by battling back for a 2-2 draw vs. the White Bear Lake Bears.

Down by two late in the third, the Queens pulled to within one with 3:43 remaining on an Alexis Paddington marker.

Then with 72 seconds left Kendra Fortin fed Kayla Maguire-Stein for the equalizer.

Lindsay Humeniuk was in net for the Queens.

They then finished the round robin with a narrow 4-3 defeat to the Fargo Freeze.

The peewees will conclude play Sunday at noon against Cloquet.

Meanwhile at the Shaftesbury Titans Prep Winter Classic in Winnipeg, the Sportop midget AA Queens went 1-1 on the day after starting with a pair of losses Friday.

Taking on the Minnesota Revolution Thunder Bay skated to a 3-1 victory.

Minnesota opened the scoring with a shorthanded effort to take the lead after one period of play.

Laura Deschamps tied it for Thunder Bay with the lone tally in the second session on an assist to Jessica Silen.

In the final frame the Queens pulled it out with Avery Baker notching the winner with five and a half minutes to go.

Stefanie Hayward then iced it with an empty netter with 35 seconds remaining.

Bailey Chenier made 15 stops to pick up the win in the Queens net.

Teresa Rogalinski had the lone Queens goal in that one.

The Sportop Queens wrap-up play in Winnipeg Sunday at 11 a.m. vs. the Peace Country Storm from Alberta.