Passengers and Crew Were Located Safe

WINNIPEG – NEWS – A small aircraft with four passengers on board went down yesterday near Landsdowne House. A Hercules search and rescue aircraft from the 17 Wing Winnipeg was working on a training mission on Tuesday. The Hercules was called in to help in the search for the small plane that had crashed in northern Ontario.

The CC-130 Hercules which is a part of the 435 Transport and Rescue Squadron from 17 Wing was training for a simulated search and rescue. The Joint Coordination Centre in Trenton, Ontario then assigned the CC-130 to locate a downed aircraft near Neskantaga First Nation also known as Lansdowne House.

The Hercules flew to the crash site, a few kilometres south of Neskantaga First Nation and crews spotted people walking near the scene.

In a media release, “Search and Rescue (SAR) Technicians in the Hercules dropped a message bundle, which contained a radio, to the downed flight crew and determined there were no major injuries. The Hercules search plane remained in the area until an Ontario Ministry of Natural Resources helicopter picked up the people and flew them to the airport at Neskantaga First Nation.

“Those guys were well-prepared,” stated Captain Kevin Coulombe who was the commander of the Hercules CC-130 aircraft who located the downed aircraft. “They had a fire going, they had food and water, they had a tent set up, and they were ready. They had a 406 beacon, which transmits a GPS location to a satellite. It gives a tail number and even information about who is flying the aircraft”. 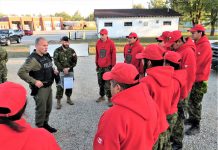