THUNDER BAY – The Canadian Pacific Holiday Train is a big hit in Thunder Bay and across Northwestern Ontario. Canadian Pacific’s annual Holiday Train program is a rolling fundraising event that travels across Canada and the United States raising money, food, and awareness for food banks and hunger issues, hosting free holiday concerts along the way. Since 1999 the program has raised close to C$9.5 million and 3.3 million pounds of food. Each Holiday Train is about 1,000 feet in length with 14 rail cars decorated with hundreds of thousands of technology-leading LED lights and a modified boxcar that has been turned into a traveling stage for performers.

The Canadian Pacific (CP) Holiday Train program is returning to the rails for a 16th year to raise money, food, and awareness for food banks and hunger issues across Canada and the United States. Since its launch in 1999, the Holiday Train program has raised close to C$9.5 million and 3.3 million pounds of food for North American food banks.

“The Holiday Train is all about the community coming together over the holiday season and helping each other out with donations to local charities,” stated E. Hunter Harrison, CEO CP. “CP continues to be grateful that our train of lights and top musical talent are welcomed with open arms and that this has become a holiday tradition in our communities.”

Leaving the Montreal, Quebec, area on November 26 and 27 respectively, our U.S. and Canadian trains will make the three week journey reaching over 150 communities.

The U.S. Holiday Train will travel across the U.S. Northeast and Midwest before its final show December 17 in Weyburn, Saskatchewan, while the Canadian train will travel west and wrap up its journey December 18 in Port Coquitlam, British Columbia.

A number of musicians will be joining the Holiday Train journey this year, including the pop rock band Odds and Jim Cuddy (of Blue Rodeo fame) on the Canadian tour and, up-and-comer country star Kira Isabella along with a cappella sensations Home Free in the U.S. Communities are encouraged to check the schedule online to see which performers will make a stop in their town. 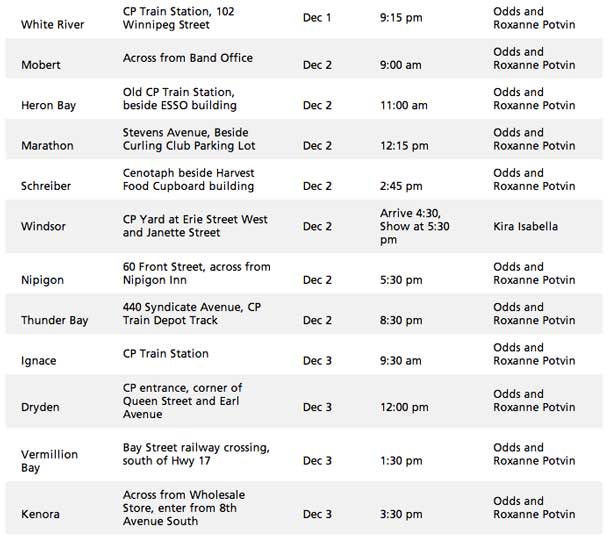 It might be a little early for a little holiday cheer, but like tens of thousands of other people across Northwestern Ontario, now is the time to start making your plans to enjoy the Canadian Pacific Holiday Train.

This year the entertainers include:

​​​Roxanne Potvin, the Juno award nominated Montreal based singersongwriter, has a blues, soul and R and B background which has seen her work with luminaries such as Colin Linden, John Hiatt and Bruce Cockburn and tour with Sue Foley and Deborah Coleman. With Roxanne’s most recent album, “Play”, she has achieved something that few artists ever succeed in doing – she’s expanded her style and grown as an artist while still keeping the grit and authenticity that is so appealing about her music.

Canadian power pop rock band Odds achieved wide commercial success in the 1990s. Most recently, Odds got together and performed old and new songs on the Barenaked Ladies’ Ships & Dip cruise. A new CD, Cheerleder, was released in 2008. The first single, “My Happy Place,” was used during the end credits for the Canadian TV show “Corner Gas.”