VATICAN CITY – Yesterday afternoon in the Vatican’s Paul VI Hall the Holy Father received in audience the members of the so-called “Pope’s Football Team for Peace” – fifty players who form part of the history of the sport, including Diego Armando Maradona, Radja Nainggolan, Javier Zanetti, Andriy Shevchenko and Andrea Pirlo, to name just a few.

The match, which took place at 8.45 p.m. in Rome’s Olympic Stadium, was organised by the Argentine P.U.P.I. Foundation, a charitable organisation, and the proceeds will be devolved to the “Scholas occurentes” initiative which, through technology, art and sport, promotes the social integration of marginalised children and young people. The name of the foundation derives from the footballer Zanetti’s nickname, “Pupi”, and is also an acronym for the phrase “Por un piberio integrado”, “For an integrated childhood”.

In his address to the organisers and participants in the “interreligious football match for peace”, the Pope emphasised that the encounter, aside from providing assistance to these projects of solidarity, also offered an opportunity to reflect on the universal values promoted by football and sport in general, such as loyalty, sharing, acceptance, dialogue and trust in others. He added, “These are values that we all have in common, regardless of race, culture and religious belief. Indeed, this evening’s sporting event is a highly symbolic gesture to show that it is possible to construct a culture of encounter and a world of peace, where believers of different religions, preserving their identity – because when I said ‘regardless of’, this did not mean ‘setting aside’, no – believers of different faiths, preserving their own identity, may co-exist in harmony and with mutual respect”.

Francis also expressed his hope that sport might contribute to “the peaceful co-existence of all peoples, banishing any form of discrimination on the grounds of ethnic origin, language or religion”. Addressing the players, he remarked, “You know that to discriminate may be synonymous with contempt. Discrimination is contempt, and you, in today’s match, are saying ‘No’ to any form of discrimination. Religions, in particular, must be a vehicle for peace and never for hatred, because God’s name must be associated only, and always, with love. Religion and sport, in their true sense, are able to collaborate and offer eloquent signs to all of society of this new era in which peoples “never raise their swords against each other”.

Before the beginning of the match, a video message from the Pontiff to the players and the public, in Spanish, was screened in the Olympic Stadium. The full text of the message is reproduced below:

“Good evening. I am glad you are gathered here for this symbolic match. It is a match that highlights the union between the teams, the union between those who participate as spectators, and the desire of all for peace. A match in which no-one plays just for himself, but for others. Or rather, for all. And in this way each person multiplies, and by playing as part of a team, each one is magnified and becomes a greater person. When playing in a team, competition is not war, but is instead the seed of peace. This is why the symbol of this match is the olive tree. I especially wish to greet the members of Scholas, who have organised this match and who will plant the olive tree of peace. I invite all of us to plant this tree of peace along with Scholas. I apologise for speaking in Spanish, but it is the language of my heart, and today I wanted to speak from the heart. Thank you”. 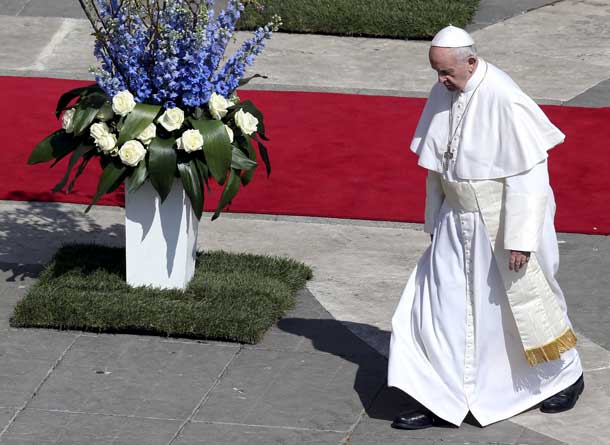