THUNDER BAY – Clyde Moonias is a young man living in Thunder Bay. He moved to the city from his home community of Neskantaga FN. Since coming to Thunder Bay, Clyde has undergone his own journey and his own struggles as he works to build his future.

It has not been an easy path for Clyde, but as he has grown up in Thunder Bay, he has learned, grown and is speaking out on the important issues that face Anishinawbek youth coming to Thunder Bay.

A few months ago, Clyde did a piece on youth suicide, and issue that has directly impacted him.

He has also shared articles on what The Colonization of Canada and Anishinwabek History means to him. 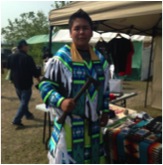