THUNDER BAY –  Camp Loon 2014 was “a very successful camp this year,” according to Captain Caryl Fletcher, the army officer commanding the Junior Canadian Rangers in the Far North of Ontario.

The annual camp, in the bush north of Geraldton, provided eight days of advanced training for 160 Junior Rangers from 20 First Nations, with an emphasis on safety on the land and water and in personal lifestyles.

“We definitely succeeded in getting the message about safety across,” Captain Fletcher said. “We drove it home at all the training sites. You watched them and you could see they listened. They put on their helmet and their gloves at the ATV site without being told to.

“They put on their personal flotation device at the boat and canoe site. They did it naturally and a large percentage of the Junior Rangers at the camp took back home what we taught them about safety and they will pass it on to others.”

The Junior Canadian Rangers are a national program run by the Canadian Army for boys and girls aged 12 to 18 in remote communities across the North. In Ontario there are 750 Junior Rangers in 20 First Nations.

Camp Loon provided a range of training activities that are not normally available to Junior Rangers in their home communities. They included specialized instruction in shooting (both rifle and paintball), boating (power boats and canoes), driving all-terrain vehicles, learning how to swim-to-survive, mountain biking, archery, lacrosse, and traditional arts and crafts.

“The army has helped to improve safety in the North, for sure,” said Sergeant Chris Kataquapit, a Canadian Ranger from Attawapiskat. “The skills and knowledge gained at Camp Loon are taken back to their communities by the Junior Rangers and more people benefit, even adults. Most of these kids know how to hunt but they don’t know safety around guns. The firearms safety training they get here is very useful. They will pass that on to others.”

“I can teach others what I learned here,” said Junior Ranger Roberta Wood, 14, of Sandy Lake. “I can tell them what I learned about safety and ATVs and power boating and shooting.”

In addition to the training, she said, she enjoyed meeting Junior Rangers from other communities and making new friends. She also liked the quality and the variety of the food provided by a military field kitchen.

Like other Junior Rangers she enjoyed the challenge of a confidence building zip line that launched from a 10-metre high platform and took them 130 metres over a river. “I was scared at first,” she said, “but I managed to do it. After that I did it almost 20 times. It was pretty fun.”

Northern Ontario has the highest number of Aboriginal drowning deaths in Canada, partly because it has a large Aboriginal population but also because the short summer and cold waters keep people from learning to swim. The camp provided Junior Rangers with a Canadian Lifesaving course called Swim-to-Survive, which provides basic swimming instruction. As a result most went home able to swim.

“That was giving back a little bit for what the community gave us,” Captain Fletcher said. “It also allowed the teams a day off the camp, doing something else, and an opportunity to visit the Interpretative Centre, and stop at a store in Geraldton. They enjoyed it.” 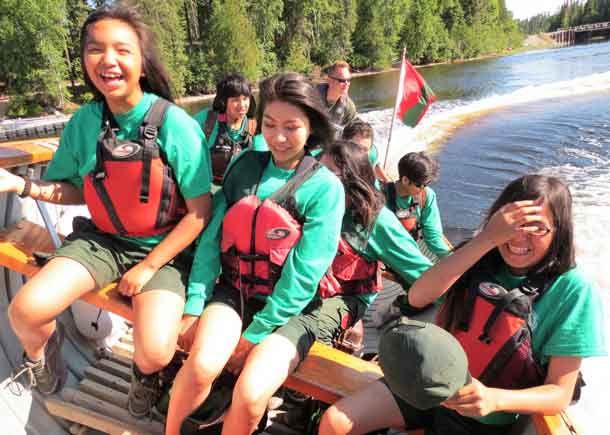