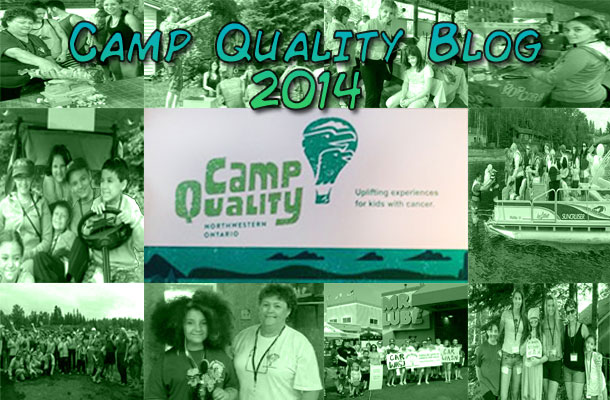 THUNDER BAY – Camp Quality – It’s day two at Camp Quality Northwestern Ontario and we started the day like any other- bright and early! The sun is shining and even though it’s not hot, we are not complaining because at least it’s not snowing. Our morning grub included fruit salad, yogurt and breakfast pizza-that’s right pizza for breakfast! A hearty breakfast was important because the campers had a big day ahead.

After some boardgames and sports with friends, the campers were treated to a Tae Kwon Do workshop by Master Seung. Not only were they able to learn many traditional moves, but he actually trusted them with nunchucks. Not surprisingly, some of the new Tae Kwon Do recruits hit themselves in the head, back, and leg with the nunchucks-surprisingly, all these mishaps were by the adult volunteers! Fun was had by all!

After lunch, Stephanie and Shannon from Wex Hoops had our campers’ heads and hips spinning with a hoola hoop lesson. Let us tell you, we have some serious skills at Camp Quality! At one point, one of our campers had three hoops spinning around her waist at the same time! Amazing!

Some very determined campers braved the cloudy weather and took advantage of East Loon Lake with some swimming: no sun + wind = cold, cold water, but it was worth it! Others spent this time in the Craft Shack painting and building the coolest homemade gum ball machines we’ve ever seen. Tennis was a third option for those wanting to master the game in preparation for our annual tennis tournament! There are so many different opportunities for our campers at any given time.

Later on, Highlights for Hope made their annual trip to camp and our campers could not have been more thrilled. Boys and girls of all ages with hair short and long were able to get outfitted with a beautiful pink lock of hair- an expression of the commitment to cancer research, education and support, a cause very close to our hearts.

Since our theme for the week is Game Shows, the campers were treated to an all ages trivia game after dinner which tested their knowledge of animals, popular culture and music. We ended the night watching a movie on our homemade big screen in our gazebo while eating a campfire favourite-Jiffypop!That’s all for today! Stay tuned for more fun tomorrow!