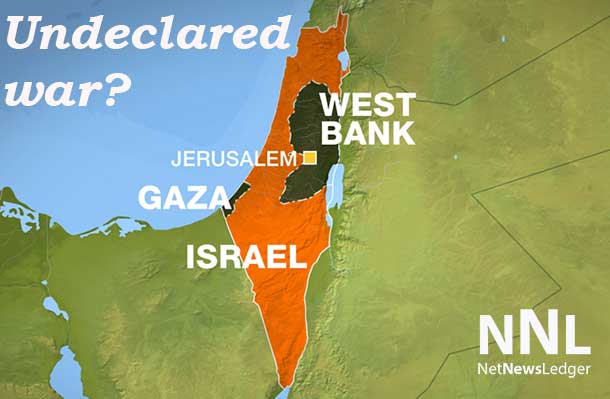 Tel Aviv – INTERNATIONAL – Rockets flew over the Israel-Gaza border as the sun set on Sunday (July 13), the sixth day of an offensive that Palestinian officials say has killed at least 160 people so far. Both sides are exchanging salvos, however there are no reported deaths on the Israeli side so far, partly due to the Iron Dome defense system.

Footage showed rockets being fired from Gaza as plumes of smoke rose above the Gaza skyline.

In one piece of video it appeared that a rocket fired from Gaza was intercepted by Israel’s defence system.

Militants in Hamas-ruled Gaza have kept up rocket salvoes deep into Israel as the worst bout of Israel-Palestinian bloodshed in two years showed no signs of abating, and Western foreign ministers said a ceasefire was an urgent priority.

Israeli Prime Minister Benjamin Netanyahu rebuffed international calls for a ceasefire while defending his country’s offensive in Gaza during appearances on U.S. television on Sunday(July 13).

Efforts to find peace are continuing. On Monday, there will be an emergency meeting of the Arab League foreign ministers.

Palestinian Foreign Minister Riyad al-Malki is expected to ask his colleagues to help to draft a resolution calling for an end to the Israeli operation in Gaza.

If that resolution is agreed to, then the plan is to submit it to the United Nations Security Council for a vote later this week, or next week at the latest.

The Palestinians tried to get the UN Security Council to pass such a resolution last week but were not successful.

The United States blocked this effort while it was still in preliminary stages.

Australia Tells Citizens to Get Out of Gaza

Julie Bishop, the Foreign Affairs Minister is urging Australians currently in the Gaza Strip to make arrangements to depart immediately.

The Australian Embassy in Tel Aviv is arranging a one-off assisted departure of Australians from the Gaza Strip.

Bishop states, “Australians wishing to depart should urgently contact the Department of Foreign Affairs and Trade’s 24-hour Consular Emergency Centre on +61 2 6261 3305 or the Australian Embassy in Tel Aviv on +972 3 693 5000 for information and advice on options. There are no plans for any further assisted departures. Australians are strongly advised not to travel to the Gaza Strip because of the extremely dangerous and unpredictable security situation and the possibility of further Israeli military operations against militants”.

“I continue to be deeply concerned by the deteriorating situation in Israel and the Palestinian Territories,” added Bishop. “The actions of militants in Gaza, who are firing rockets indiscriminately into Israel, are inexcusable and must be condemned. The retaliatory acts from both sides that have led to civilian deaths and injuries are deeply regrettable, and I call on all parties to exercise restraint and do everything necessary to avoid a further escalation of violence”.

The Australian Government has updated its travel advice for Israel and the Palestinian Territories, with the full advisory available at: www.smartraveller.gov.au

The battle in Gaza is also raging on social media. Twitter and Facebook have been loaded with people sharing images, videos, and thoughts.

For six days, as Israeli Pilots and Palestinian militants are battling in the air — with one rocket attack after another. But amid speculation the two sides are headed for a ground war..

Israelis and Palestinians along with their supporters world-wide are competing on another battlefield — social media.

In handout video from the Israeli foreign ministry, an elderly woman is seen cooking when a siren goes off. She only has 15 seconds to reach the shelter, but she can’t get down the stairs.

Another video purports to show the Israeli army issuing a warning to Palestinian civilians before launching air strikes.

There is less actual bloodshed online, but the attacks with words are very powerful.