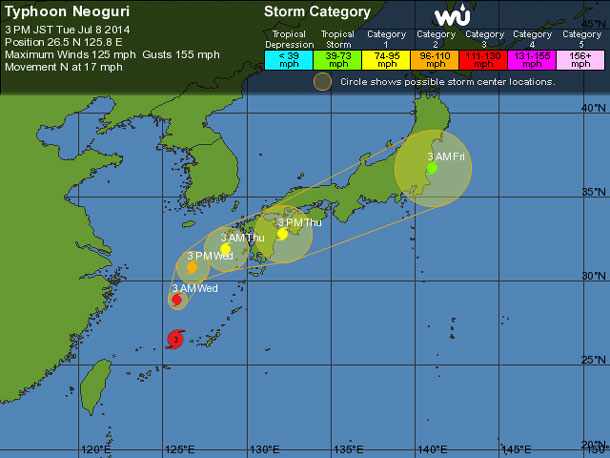 OKINAWA, Japan – Weather- The Japanese island of Okinawa was battered by high winds and heavy rain as it bore the brunt of powerful Typhoon Neoguri.

The tropical island 1600 miles southwest of Tokyo was the first Japanese area to feel the effects of the storm, which has been downgraded from a super typhoon but was still packing sustained winds of 180 kilometers per hour.

Japanese Chief Cabinet Secretary Yoshihide Suga stated, “We have not received any information concerning great damage or injury. The prime minister has ordered the government to provide information to our citizens and to prepare thoroughly for any disaster and to respond quickly if anything is to happen.”

Guests of one hotel in Okinawa watched the storm from the safety of the lobby while nearly seven-thousand households lost power.

American Sailors from Naval Mobile Construction Battalion 1 are braced and prepared for the impact of Super Typhoon Neoguri.

“Right now, we’re finishing up securing the camp, tying up and putting away anything that is not immobile so that nothing will become a projectile hazard throughout Camp Shields,” said Navy Command Master Chief Petty Officer Dean Fischer, the battalion’s command master chief.

Although Super Typhoon Neoguri has wind gusts at more than 150 mph according to the Joint Typhoon Warning Center, the Seabees are adept in natural disaster preparation and the relief efforts, which may be needed in the storm’s aftermath, Fischer said.

“Typhoon season pretty much aligns with hurricane season back home in Mississippi, so Gulfport Seabees have a very long history of dealing with TCCOR [tropical storm condition of readiness] conditions,” the command master chief said. “All of the engineering assets on Okinawa will be in contact before, during and after the storm coordinating anything they would need. For us, the primary mission would be to support the Navy bases, the Marine Corps and the Air Force bases.”

Typhoon season officially runs from June through November. Neoguri will still be a super typhoon when it crosses the gap between the Ryukyu Islands of Miyako Jima and Okinawa.

NMCB 1 sailors are making the best of a stormy outlook, preparing to hunker down in their barracks until they receive an all-clear notice from their chain of command.

“I will take accountability of all of the personnel in my building continue to maintain their safety throughout the storm and make sure they have food and water,” said Petty Officer 1st Class Johnny Turner, a yeoman. “Our mustering point will be in our lounge area, where we will meet and get accountability to the command mustering point of contact, and while we ride out the storm, it will be an opportunity for us to bond [and] relax after working hard to secure the base.”

Master Chief Petty Officer Benno Lederer, Camp Shields officer in charge, said that because of NMCB 1’s diligent efforts in preparing for the typhoon, Camp Shields is braced for the storm well ahead of schedule.

“All NMCB 1 and 30th Naval Construction Regiment typhoon preparations are done, and we are prepared for the storm,” he said. The sailors will begin lockdown for Tropical Cyclone Conditions of Readiness 1 late today or early tomorrow and are expected to be in that state until July 9 or 10, he added.

Naval Mobile Construction Battalion 1 is deployed to Okinawa as part of its 2014 deployment.