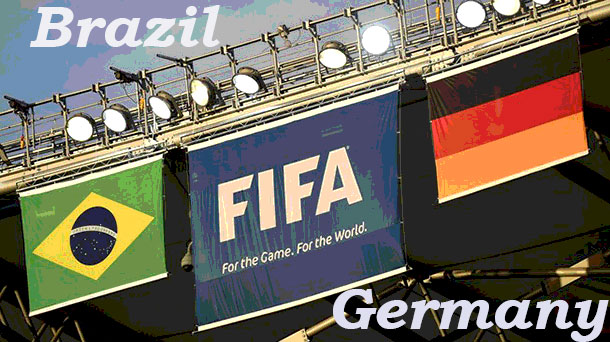 On Tuesday, Brazil faces Germany in the first of the World Cup semi-finals. It is the pair’s first competitive match since the 2002 Final. And while Brazil were then the star-studded samba side, it is now Germany that’s earning the plaudits from the hosts.

For the first time in FIFA World Cup™ history, both semi-finals at Brazil 2014 will conjure memories of showpiece games from years gone by.

The Netherlands will tackle Argentina on Wednesday eager to avenge their Final loss in 1978, when La Albiceleste prevailed 3-1 after extra time on home soil. Before that, however, the honour of raising the curtain on the last-four stage goes to a pair of global giants, with five-time winners Brazil keen to repeat their triumph at Korea/Japan 2002, where Ronaldo and Co lifted the Trophy after downing three-time champions Germany 2-0.

Brazil now stand on the verge of another decider courtesy of a 2-1 success against Colombia. It was their most probing display of the competition so far, yet the hosts have been gripped by doubt ever since. The sight of Neymar leaving the pitch on a stretcher had Seleção fans biting their nails, and their worst fears were promptly confirmed when the gifted talisman was ruled out of the rest of the tournament with a fractured vertebra.

Coach Luiz Felipe Scolari must now choose between a like-for-like replacement and a tactical rethink, and his problems do not end there either. The suspension of captain Thiago Silva ought to mean Dante filling in at the back, and though the Bayern Munich stopper will know the opposition well, the hosts are hardly in prime shape as they vie to clinch a spot in the Maracana Final.

As for Germany, they have been building confidence with every passing victory, even if they lack their trademark air of invincibility. Joachim Low’s side have been drawing strength from an ironclad defence, and they have looked even sturdier in that department since Philipp Lahm’s return to right-back from midfield.

It is telling, too, that a quartet of Germany players feature in a list of the tournament’s ten most prolific passers, with Lahm leading the way on 471 ahead of Toni Kroos (450), Per Mertesacker (324) and Jerome Boateng (315). With belief coursing back through their veins, Die Nationalmannschaft are now focused on going all the way.