THUNDER BAY – As people across Canada make plans for the Canada Day long weekend, one of the factors that will play in for all of us is the weather.

This year, with Canada Day on Tuesday, for many people it will be a four day weekend with many people taking Monday off as well.

To help Canadians plan their celebrations, meteorologists at The Weather Network have prepared a weather outlook for Saturday, June 28 to Tuesday, July 1.

“Nearly all parts of the country have the threat of thunderstorms at some point during the extended long weekend with the exception of coastal B.C. and Nunavut,” said Chris Scott, Chief Meteorologist at The Weather Network. “There will also be plenty of warm weather which will have people enjoying the outdoors, so it’s critical to be aware of rapidly changing conditions and head inside at the first rumble of thunder.”

This week, leading up to the Canada Day weekend, temperatures across the country will be changeable, but average out to near seasonal.

During the Canada Day weekend (June 28 – July 1), warm and humid weather will surge into much of Eastern Canada from Ontario to Newfoundland. However, the increase in heat and humidity will also bring the threat for showers and thunderstorms from time to time. The Weather Network is monitoring the timing for a transition to cooler weather in Ontario towards the end of the long weekend as that would bring a more widespread threat for rain and thunderstorms.

To provide an understanding of how this forecast compares to past Canada Days, the chart below shows the historical average and record temperatures and precipitation for some of the major cities across the country on July 1: 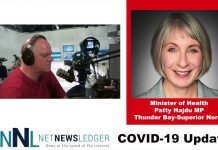 Thunder Bay Continues Moves to Opening Up Facilities and Events