The Economic Case for Making Rail Infrastructure a Priority

THUNDER BAY – POLITICS – Passenger rail in Canada has been in dire straits for many years now. Beginning with devastating cutbacks in the 1981 and 1989 federal budgets, our system has been in a state of mismanaged decline that has accelerated with each subsequent government.

We in Thunder Bay-Superior North have been without passenger rail since 1990, when service along the North Shore was axed by the Mulroney Conservatives. The cuts have had wide-reaching impacts, diminishing tourism and costing our local economies dearly.

With such a bleak picture, it is understandable that some think it time to throw in the towel on the fight for rail funding. Many believe passenger rail is a lost cause.

But on May 12, we finally saw the fruits of my labours. After I questioned the government repeatedly in Parliament and embarked on a whistle-stop tour through the Maritimes (attended by hundreds of protestors), Transport Minister Lisa Raitt announced that the federal government would be intervening after all to save VIA Rail’s Halifax-to-Montreal Ocean route. Many breathed a sigh of relief!

The Ocean line had been in jeopardy since CN announced in February that they would be abandoning a 70-km stretch of track between Bathurst and Miramichi, New Brunswick.  The track was underused and in need of an upgrade, but with no buyers willing to invest, it looked as if the Maritimes would be without passenger rail service for the first time since 1836.

Mercifully, the Conservatives bowed to pressure. But while the $10.2 million in federal funding for the Ocean line is a welcome investment, sadly it will still only restore service up to the dismal status quo that has been in place since 2012, when the Ocean’s six times weekly service was reduced by half.

The Maritime rail service cuts are symptomatic of a trend afflicting VIA for decades. Today, VIA’s managers have the unenviable task of trying to increase ridership in the face of higher prices (due in large part to excessive trackage fees from CP and CN), reduced service, and ever-increasing competition.

Passenger rail is the safest, most fuel efficient and environmentally responsible means of getting people from A to B. Often overlooked is that passenger rail has the potential to be an economic driver, if governments are willing to step up to the plate and invest in a system that works for all Canadians.

There is an abundance of evidence from around the world showing that investment in passenger rail infrastructure pays huge dividends – indeed, one would be hard pressed to find a more surefire way of driving economic growth.

Canada consistently lags far behind other developed nations in rail investment. In 2008, our total rail infrastructure investment amounted to only $0.82 per $1,000 of GDP.  China invested more than fifteen times that amount.

Decades of underfunding, deregulation and privatization have left Canada’s patchwork of rapidly aging rail infrastructure in serious need of repair and upgrading, as is evidenced by the alarming number of recent derailments and safety breeches. Federal investment in passenger rail is at its lowest level in history: inflation-adjusted per-capita funding has declined 90% since 1981. The inadequacy of Canada’s current rail infrastructure translates into missed economic opportunities at every turn.

In Canada, these proven arguments favouring rail investment and modernization haven’t sunk in with our federal and provincial governments.

If our governments want to get serious about reducing gridlock and building a sustainable Canadian transportation system, then investing in passenger rail infrastructure is clearly one of the key ways forward.  The way to fund it is with Carbon Fee and Dividend. Our future as a competitive nation is riding on it. 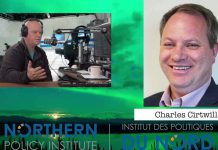