Fresh insight into how the oceans can affect CO2 levels in the atmosphere shows that rising temperatures can indirectly increase the amount of the greenhouse gas emitted by the oceans.

Scientists studied a 26,000-year-old sediment core taken from the Gulf of California to find out how the ocean’s ability to take up atmospheric CO2 has changed over time.

They tracked the abundance of the key elements silicon and iron in the fossils of tiny marine organisms, known as plankton, in the sediment core. Plankton absorb CO2 from the atmosphere at the ocean surface, and can lock away vast quantities of carbon.

Researchers found that those periods when silicon was least abundant in ocean waters corresponded with relatively warm climates, low levels of atmospheric iron, and reduced CO2 uptake by the oceans’ plankton. Scientists had suspected that iron might have a role in enabling plankton to absorb CO2. However, this latest study shows that a lack of iron at the ocean surface can limit the effect of other key elements in helping plankton take up carbon.

This effect is magnified in the southern ocean and equatorial Pacific and coastal areas, which are known to play a crucial role in influencing levels of CO2 in the global atmosphere.

Researchers from the University of Edinburgh say their findings are the first to pinpoint the complex link between iron and other key marine elements involved in regulating atmospheric CO2 by the oceans. Their findings were verified with a global calculation for all oceans. The study, published in Nature Geoscience, was supported by Scottish Alliance for Geoscience Environment Society and the Natural Environment Research Council.Dr Laetitia Pichevin, of the University of Edinburgh’s School of GeoSciences, who led the study, said: “Iron is known to be a key nutrient for plankton, but we were surprised by the many ways in which iron affects the CO2 given off by the oceans. If warming climates lower iron levels at the sea surface, as occurred in the past, this is bad news for the environment.” 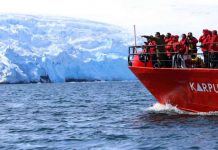