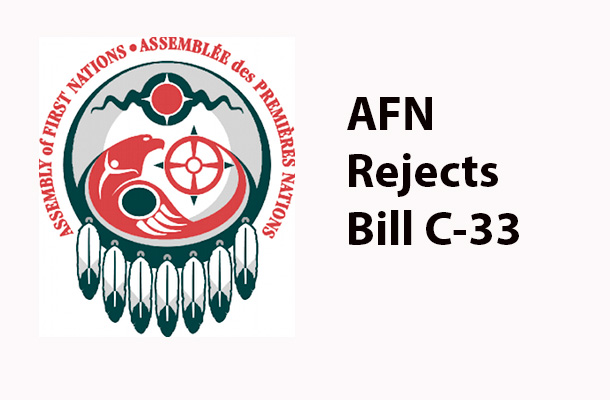 OTTAWA – The Assembly of First Nations Chiefs-in-Assembly voted in favour of an alternative education resolution put forward by Chiefs from Ontario and a statement by the Quebec Chiefs this afternoon at the Special Chiefs Assembly in Ottawa.

Both the statement and resolution clearly reject Bill C-33 First Nation Control of First Nations Education Act. It was decided that the magnitude of amendments required for Bill-33 to properly reflect the conditions set out in AFN Resolution would fundamentally require a new piece of legislation.

The move follows on a Grassroots Education Summit in Thunder Bay.

Manitoba Grand Chief Derek Nepinak states, “Be aware of the messaging from social media and mainstream media following our discussion today. Today, accountability won. Today, the inherent and treaty rights of our families and communities won. Media is already portraying today as nothing but Chiefs fighting. The establishment does not want to see empowerment. They do not want to see how true empowerment and accountability works within indigenous diplomacy… We can make some good moves from here, including finding ways to deconstruct the hierarchical structure that has robbed our communities and grassroots members from their birthright to legitimate representation at all levels of a political system. From here, we can find ways to bring real consultation back to our grassroots peoples who deserve a chance to speak and be heard on trans-formative education for our young people”.

“Deliberations and discussions led to adoption of both a statement and a resolution confirming that the way forward is renewed nation to nation negotiations to develop a new fiscal framework for First Nations education,” said Grand Chief Gordon Peters who holds the Chiefs of Ontario Education Portfolio. “I am confident this alternative proposal will facilitate a national position to move in a unified direction to launch a new set of negotiations that ensure First Nations are part of the solution from the outset.”

The resolution also calls for Canada to immediately begin providing the $1.9 billion pledged for First Nations education in the 2014 federal budget until a new fiscal framework is agreed upon.

“The discussions were difficult but we are tasked to represent the wishes of First Nations in Ontario, and come to the best common understanding on a way forward,” said Ontario Regional Chief Stan Beardy. “We expect the federal government will respect the decisions of the Chiefs and enter into new negotiations.”The Assembly gathered First Nations leaders from across the country who dedicated the day to the formation of a national position on the controversial federal Bill C-33.