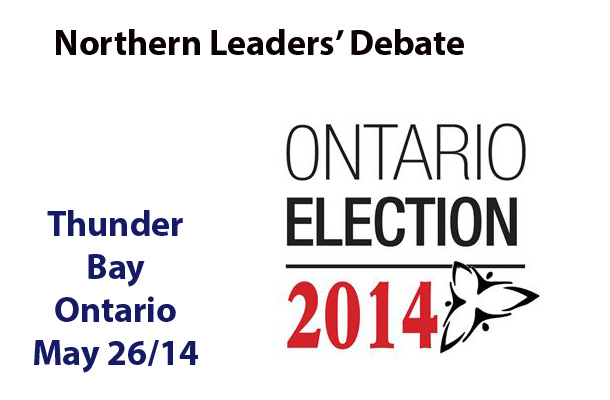 THUNDER BAY – The race is even tighter. The Progressive Conservatives have fallen by four points, and the Liberals have gained one point. Despite having some stalward New Democrat supporters expressing concern, the New Democrats are up by four points.

The Northern Leaders Debate on Monday in Thunder Bay is the first opportunity for the public to see the leaders joust with each other. The debate will be Livestreamed on NetNewsLedger.

Ontario Progressive Conservative Leader Tim Hudak shook up the provincial election campaign with a recent announcement that he would create 1,000,000 jobs as Premier of Ontario and trim 100,000 jobs from the public sector. But the results of a new Ipsos Reid poll conducted on behalf of CTV and CP24 has revealed that only one in three (33%) believe the goal of creating one-million jobs is credible, and that the majority (61%) of Ontarians oppose his plan to trim the civil service by 100,000 employees. Moreover, the PCs appear to have no advantage of being seen as the party with the most credibility on economic matters.

Despite these rejections, the Ipsos Reid poll released yesterday show that, fueled by the desire for change (72%) among the electorate, the popular vote at this stage of the campaign has the Progressive Conservatives under Tim Hudak receiving 35% support among decided voters (down 4 points since last week), while the Liberals under Premier Kathleen Wynne would receive 31% support (up 1 point). The New Democratic Party, led by Andrea Horwath, would receive 28% of the vote (up 4 points), while 6% would vote for some other party, including the Green Party led by Mike Schreiner (down 1 point). Two in ten (19%) Ontarians remain undecided (down 1 point).

Further, among the 47% of Ontarians who say that ‘nothing short of an unforeseen emergency could stop me from getting to the voting booth and casting my vote’, the PCs (41%, +6) remain well ahead of the Liberals (30%, -1) and the NDP (26%, -2), while support for other parties drops down to 3% (-3). Tory voters are the most committed to show up, while the NDP and Liberals might struggle to get out their vote.

PC Leader Tim Hudak has made it a central part of his campaign that he and his new government will create 1,000,000 (one million) jobs in the province of Ontario over the next eight years. Reflecting on this statement, just one in three (33%) Ontarians see it as credible (5% very/28% somewhat), while the vast majority (67%) of Ontarians do not see it as credible (31% not at all/36% not very).

PC Leader Tim Hudak has pledged to reduce Ontario government workforce by 100,000 jobs, a plan that will affect all workers including teachers and their assistants, but not nurses, doctors and police, and will bring employment levels within government back to 2009 levels. Thinking about this plan, four in ten (39%) ‘support’ (14% very much/25% somewhat) this course of action, while six in ten (61%) ‘oppose’ (37% very much/24% somewhat) the public-sector job cuts.

Typically in Canadian and Ontario politics, the Tories have had the edge over other parties as being seen as most credible on the economy, and being the best economic managers. However, Tim Hudak and the Progressive Conservatives appear to have lost this advantage.

When asked which Leader and Party seems to have the best platform of ideas that can help the Ontario economy, 29% of Ontarians believe it is Tim Hudak and the PCs, 28% say it is Kathleen Wynne and the Liberals, 26% believe it is Andrea Horwath and the NDP, and 18% think it’s some other party or leader.

Despite Unpopular Economic Policy, Wind Still at Hudak’s Back…

Despite a jobs platform that few find credible and most oppose, the winds of change are still decidedly in Tim Hudak’s favour, as 72% believe it is time for a new government to take over at Queen’s Park. Further, PC voters are the most galvanized to turnout on Election Day and vote, giving the Tories a ballot-box bonus, meaning that Tim Hudak and the PCs are still in the driver’s seat to win a plurality of the popular vote. 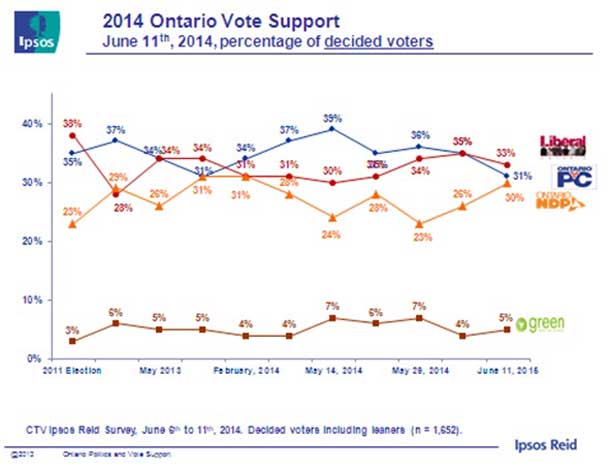