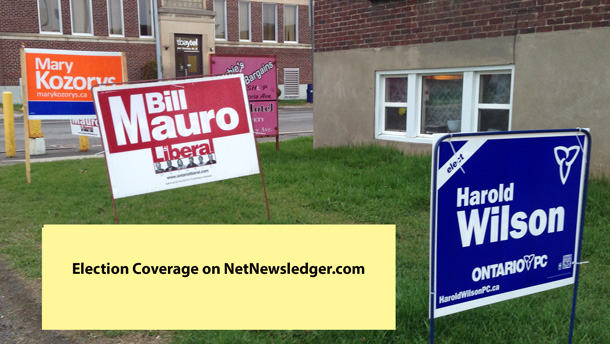 Debate on Monday May 26th

THUNDER BAY – Northern Ontario residents have the opportunity to hear first-hand about the provincial issues that matter to them at the Northern Leaders’ Debate, to be held on Monday, May 26th at the Valhalla Inn in Thunder Bay.

Kathleen Wynne, Leader of the Ontario Liberal Party and Andrea Horwath, Leader of the New Democratic Party of Ontario have confirmed their attendance at the debate. A panel of members of the NOMA, FONOM, NOACC and the Northeastern Ontario Chambers of Commerce will address the two leaders with questions on provincial policy affecting northern Ontario.

Unfortunately, due to scheduling issues, Tim Hudak, leader of the Progressive Conservative Party of Ontario is unable to attend. In the last election, then Ontario Liberal leader Dalton McGuinty did not attend the Northern Leaders’ Debate.

“The future of Ontario is in northern Ontario,” said Mayor David Canfield, NOMA President. “We are looking forward to having an opportunity to learn what each party will deliver to assist our region in growth and prosperity,” added Canfield.

FONOM President Al Spacek said “this debate will provide an opportunity to bring forward what really matters in northern communities – from northerners themselves.”

Nathan Lawrence, NOACC President added, “The opportunity for growth in Northern Ontario is immense. We look forward to hearing what policies each leader would put in place to ensure the full potential is realized.”

The debate is open to the public with a luncheon beginning at 11:30 and a one hour debate commencing at 12:15pm. Advance registration is required at a cost of$45; register online at www.noma.on.ca/debate.