The Grade Twelve student from Sandy Lake has earned his way into the final five for the business writing plan competition organized by Thunder Bay Ventures.

There were 140 students from across Thunder Bay who entered the competition. Enter the Den is loosely based on CBC’s popular Dragon’s Den and MSNBC’s Shark Tank, where entrepreneurs pitch their idea before a panel of ‘Dragons’.

Scott has returned home to Sandy Lake, NetNewsLedger is working to set up an interview as we have with all the other finalists in the 2014 Enter the Den Competition.

For Enter the Den however the students are not trying to face down Kevin O’Leary, or getting their ideas bashed around. The goal of the Thunder Bay Enter the Den Dragons are to foster and encourage the high school students into seeing a future for themselves in business.NetNewsLedger, as a sponsor of Enter the Den will be livestreaming the finals on Thursday, May 22nd from Hammarskjold High School. 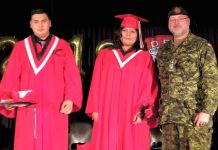 Building Toward Success in Northern Education