Home Politics Federal John Rafferty – For Dual Citizens and Canadians frequently travelling to the...
OTTAWA – POLITICS – About a week ago I was speaking with a constituent named Ken regarding a recent column of mine on the sharing of tax information of dual Canada-US citizens between those two countries. I took his questions and concerns to Minister of National Revenue, Kerry-Lynne Findlay. Some good information was provided to me, and I’d like to share some of it with you this week.

“….Beginning June 30, 2014, both Canada the US will implement the final phase of the ‘Entry/Exit Initiative of the Perimeter Security and Economic Competitiveness Action Plan’ in which both countries will share information on people entering and leaving the respective countries. In other words, both countries will, for the first time, be able to independently determine the number of days spent in each country. What this means for Canadian Snowbirds is that they must be more vigilant than they have in the past about counting and reporting their days in and out of each country. Starting next year, both Canada and the US will both know, in real time, which country snowbirds have been in and for how long.

The Entry/Exit Initiative of the Perimeter Security and Economic Competitiveness Action Plan is part of a larger cooperative effort between Canada and the US called ‘Beyond the Border: A shared Vision for Perimeter Security and Economic Competitiveness’ announced on February 4, 2011. More information is available here: (http://actionplan.gc.ca/en/content/beyond-border). The stated purpose of the effort is to promote security and economic competitiveness through various means. A full description of the action plan can be found here: (http://actionplan.gc.ca/grfx/psec-scep/pdfs/bap_report-paf_rapport-eng-dec2011.pdf).

Before the implementation of Phase IV of the ‘Entry/Exit Initiative’ each country counted individuals’ day presence only when they entered the country, and not when they left the country. Further, this information was rarely shared between the two countries. Consequently, typically neither country knew how long someone had been present within its borders.

Snowbirds
If you spend part of the year in the United States, for example, for health reasons or on vacation, and you maintain residential ties in Canada (that is, a home, a spouse or common-law partner, a property, etc.), CRA usually considers you to be a factual resident of Canada.

The CRA has developed a tax tip sheet for Snowbirds to assist in identifying their tax obligations: (http://www.cra-arc.gc.ca/nwsrm/txtps/2014/tt140107-eng.html). Starting June 30, 2014, Canadian snowbirds will have to be much more vigilant than they have been in the past about counting and reporting their days in an out of each country.”

I’d like to thank Minister Findlay for sharing this information, and also point out that if you are a dual Canada-US citizen, cross our border frequently for business, or spend a lot of time in the US for vacation or health reasons (ie: a ‘Snowbird’) then you will need to “be more vigilant” than in the past about counting the number of days you spend in each country (this was specifically mentioned twice in the email). Both governments will now know in “real time” which country you are in, how long you have been there for, and how many times you have visited in a given year.

By being more vigilant and keeping track of your time spent in each country you will increase your chances of avoiding any unforeseen tax penalties or difficulties with either or both governments. With that being said, if you do run into any problems or have any questions my staff and I are here to help. Have a good week. 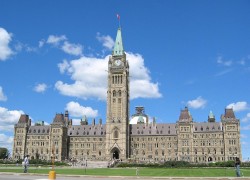