THUNDER BAY – Environment – Way back in 1970 in the State of Connecticut, Bruce Hyer and Elizabeth May lived 5 miles from each other.

Bruce was in university studying biology and environmental studies, and Elizabeth was in high school.

Bruce was a statewide coordinator for Earth Day #1 for Connecticut, and Elizabeth organized students for a high school environmental teach-in for that first Earth Day. Small world! Later, Bruce moved to northwestern Ontario, and Elizabeth moved to Nova Scotia with her family.

Elizabeth successfully lobbied to stop broadcast aerial spraying in forests with non-selective synthetic chemical pesticides for spruce budworms in Nova Scotia, and Bruce did the same in Ontario. They collaborated frequently and have remained friends for decades.

Now, they have a fun idea to sponsor and hold a musical celebration for Earth Day #44, and make it a non-profit fundraiser for Environment North, New Directions Speakers School, and the proposed Thunder Bay Indian Friendship Centre Youth Centre. It is non-partisan and non-political. They asked their friends Rodney Brown, Valdy, Sarah Harmer, and visual artist Brian Holden to donate their time and talents… and so here we go! 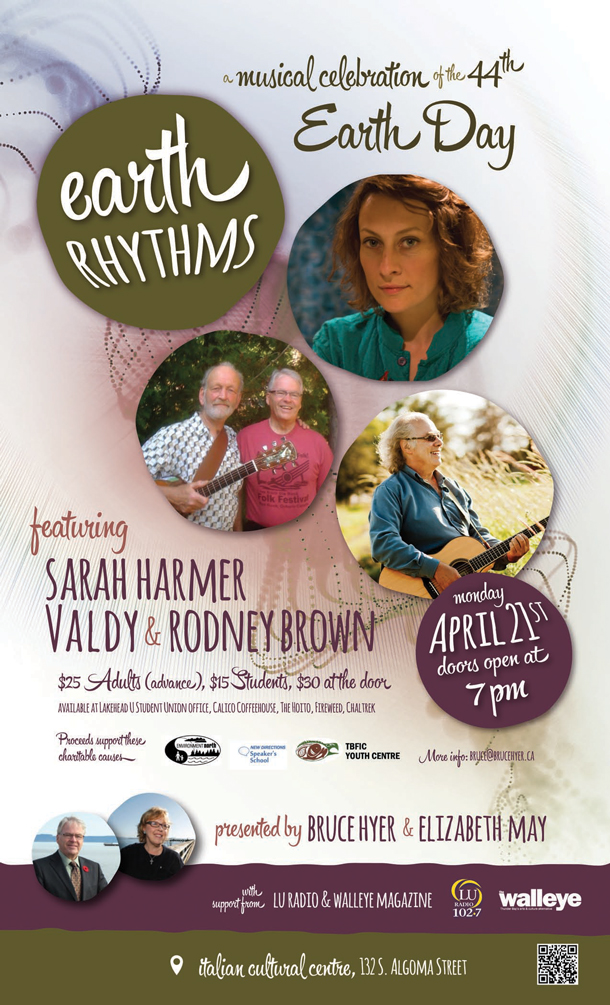