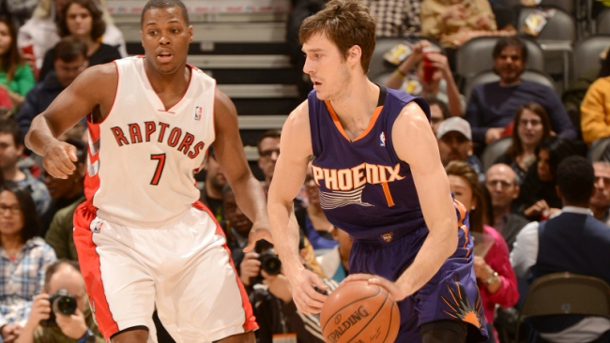 TORONTO – Sports – The match-up between the Toronto Raptors and the Phoenix Suns was one of the most anticipated of the season for me.   I recently had the opportunity to watch this Phoenix team on a trip to Arizona and was really impressed with what I saw. Coach Jeff Hornacek has them playing fun, fast, uptempo basketball. They’re a team that’s quick in transition and able to move the ball well. If that sounds a lot of the Toronto Raptors than it should as much like the dinosaurs, the Suns have overachieved in a major way playing a similar style of basketball.

Both the Raptors and the Suns were expected to be candidates for a lottery spot. Instead, the Suns are battling with Memphis for the final spot in the ultra-competitive Western Conference and the Raptors sit in 3rd place in the East. To give you an idea of just how competitive the West is if Phoenix were in the East, they’d be in in 3rd place with a slightly better record than the Raptors.

I was also looking forward to an intriguing match-up between Goran Dragic and Kyle Lowry. One of the most compelling story-lines of the game was the fact that the two star point guards who are seen as amongst the most underrated in the league and amongst the best in the NBA were once teammates with the Houston Rockets. Both were jettisoned in favour of Jeremy Lin and now both are outperforming him for their respective teams. It was going to be tremendously exciting to see them go against each other.

Another interesting aspect of this game was the coaching match-up. Both Jeff Hornacek and Duane Casey can be considered candidates for coach of the year for the way in which their teams exceeded every imaginable expectation this season. Watching what kind of match-ups they’d institute on the court promised to be another important element of this match-up.  The game lived up to the hype as it was a high scoring, fast paced affair that ultimately resulted in a 121-113 win for the Phoenix Suns, which allowed them to get closer to a playoff spot.  Now here are ten thoughts on the game.

1) Kyle Lowry: Lowry once again proved why he is the absolute leader of this squad. Beyond pouring in a team high 28 points and 13 assists, he also battled hard on defence. Getting back to force turnovers and challenge both Dragic and Eric Bledsoe. What was impressive about his scoring is that 19 of those 18 points came in the 3rd quarter as he literally tried to will the Raptors a  Lowry has been the Raptors most important player all season and no moment in the game cemented that reality more than when PJ Tucker collided with Lowry with a minute and a half left in the game, catching the point guard’s head with his knees. It looked like he might be done for the season. The crowd around me audibly gasped with one fan commenting: “That’s it. We’re screwed.” Thankfully Lowry returned to finish the game and passed concussion protocols. It was a terrifying moment for the Raptors that had the potential to be absolutely devastating to the team.

2) DeMar DeRozan’s skillset:  Everybody knows that DeMar DeRozan is likely the Raptors most gifted player on offence. His status as the team’s only All-star certainly cements that fact, but what impressed me Sunday afternoon was DeRozan’s D. He led the team with four steals and was all over the floor during his 39 minutes of playing time. DeRozan had really added so many more elements to his game. His tight D and ability to get back and defend his position or switch assignments as needed has added so much to the Raptors. DeMar’s ball movement has also been an absolutely pleasure to watch. He’s been a passing machine as of late and has 7 dimes in the loss on Sunday. He was able to adjust when being doubled or stymied by the defensively gifted PJ Tucker. Although he finished with 17 points, DeRozan contributed much to the Raptors.

3) Gerald Green:  What a game for the gunner! Gerald Green has been on fire lately averaging 21.5 points per game over his last 8 including a 41 point game against the Oklahoma City Thunder. He was very impressive against the Raptors as he poured in 28 points including going 5 for 8 from beyond the arc. Green’s been a heat check guy lately for the Suns and as Toronto found out on Sunday, if you can’t stop him, he could torch you. Like any good gunner, Green is able to get open and has a great court vision. Watching Green shed defenders and take baseline threes was an absolute pleasure for any basketball fan.

4) The Morris twins: I have to admit that I absolutely love the Morris twins. Marcus and Markief are one of my favourite combinations in the NBA this season. How cool is it that two twin brothers are not only in the NBA, but also play together on the same team? If that wasn’t enough, they’re also two of the best players on the Suns. Marcus, the forward, had a solid game pouring in 10 points, adding three boards and some effective defence. Markief, the power forward, meanwhile, had an absolute monster day with 16 points, 14 rebounds, two assists and a steal. He absolutely killed the Raptors on the boards grabbing 10 while on defence. Once Markief came off the bench, Toronto’s fate was pretty much sealed as he just shut the team down in the paint. It was a great day for the Morris twins.

5) Eric Bledsoe: It was great to see Eric Bledsoe back in the in the mix after missing 33 games with a right knee injury. Bledsoe has been one of the keys to the Suns potent offensive line-up and having him back is certainly a huge boost to them. A natural point guard, he starts alongside Goran Dragic to create one of the most dynamic backcourts in the entire league. The two of them are able to stymie most defences especially when combined and it was good to be them reunited for a few stretches during the game. Bledsoe played in 29 minutes and although he appears not yet 100% coming off his injury, he was still able to chip in 14 points, 3 dimes and contribute on defence. The Suns will need Bledsoe’s production as they fight for a playoff spot.

6) Goran Dragic: Dragic had been a big draw for me both times I’ve seen the Suns this season. His blazing speed is something that needs to be seen in person. His pump fakes, head fakes and Eurosteps were a pleasure to watch on Sunday afternoon. The Raptors did do a fairly good job of defending him, forcing three turnovers, but Dragic’s fearlessness, at one point driving right at Amir Johnson, allowed him to penetrate the Raptors D for 19 points. I’ve been a big fan of Dragic’s for a long time and seeing him take off the way he has really affirmed the talent I saw in him. He, like Kyle Lowry, is the unquestioned leader of his squad and just like Lowry I can imagine that the Rockets regret letting him go.

7) The Raptors two-guard point guard line-up: I can’t stress enough how great it is when Duane Casey has Kyle Lowry and Greivis Vasquez on the floor at the same time. It’s a line-up that allows for just beautiful ball movement, which is turn allows the Raps to get defenders off position. It also helps that both Vasquez and Lowry are able to hit from long range. That means either man can use a big for a pick and fake driving in to throw back to the other guard. Or simply choose to drive in if a defender goes back to defend the perimeter. Really it creates so many options. Whenever these two share the floor, the Raptors are able to eat away at deficits and one of the nicest runs they had all game occurred with a Vasquez-Lowry backcourt.

8) T-Ross: The Raptors best heat-check guy. When Ross is on, he’s on. He had a nice game offensively putting up 22 points including going 4-for-8 from beyond the arc. Terrence Ross is only in his second year, once he is able to hit shots more consistently game in and game out, the sky’s the limit for him. Even when his shot is off, he’s still one of the Raptors best defenders and a key guy for them especially in terms of shutting down wing players.  Ross showed what he could do against the Suns running both sides of the floor and going shot-for-shot with Gerald Green for a stretch of three pointers.

9)  The Raptors bigs: Jonas Valanciunas had another solid outing as he started red hot offensively before getting into foul trouble. He still put in 15 points, 5 boards, an assist,  two steals and a block. A really nice stat line for the second year big. JV was particularly impressive going toe-to-toe with Alex Len and Miles Plumlee. Jonas outworked and out-muscled both opposing centres at times and showed superior footwork and an increasing level of tenacity. I love what I’ve seen from the Lithuanian Sensation these last two games. Amir Johnson as also stellar putting up 20 and clogging lanes and making some stops. Unfortunately, what once again hurt the Raptors and ultimately contributed to the loss was the lack of Patrick Patterson, the team’s best defensive big man. If the Raptors are going to make a run in the playoffs, they need 2Pat back.

10) PJ Tucker: You couldn’t help but feel for PJ Tucker after his accidental collision with Kyle Lowry, because he’d been having an excellent game. Tucker was instrumental in holding DeMar DeRozan to under 20 points, a rarity this season.  Good defence is what wins games and Tucker brought the goods for the Suns. He snagged a game high 4 steals for the team and also added 7 boards – including 5 on the defensive side and 11 points. The veteran utility man continues to be an unlikely success story in the NBA. Cut by the Raptors in 2007 after his rookie season. After which he had stints playing in Israel, Ukraine, Greece, Italy, Puerto Rico and Germany before returning to the NBA with the Suns last season. Almost fitting that he played such a key role in beating his first NBA squad.   The Raptors are next in action Tuesday night against the Atlanta Hawks.   The Suns dropped a 105-98 decision in Brooklyn against the Nets on Monday night.