THUNDER BAY – Technology – It has been several years since the 2011 tsunami that hit Japan and caused so much damage to the island nation. Predictions on where the debris from the aftermath of that natural disaster started almost instantly.

The amount of debris in the ocean is growing exponentially, becoming more and more hazardous and harmful to marine life and therefore also to our ocean food source. Measuring and tracking the movements of such debris are still in their infancy. The driftage generated by the tragic 2011 tsunami in Japan gave scientists Nikolai Maximenko and Jan Hafner a unique chance to learn about the effects of the ocean and wind on floating materials as they move across the North Pacific Ocean.

What Happens to Pacific Ocean Debris?

Shortly after the tsunami struck, Maximenko and Hafner used the IPRC Ocean Drift Model to predict where the debris from the tsunami would go. Their computer model is based on trajectories of real satellite-tracked drifting buoys and satellite-measured winds.

The model has now been charting the possible paths of the tsunami driftage for nearly 3 years. The scientists have made a major improvement to the initial model: it now accommodates objects of different shapes and buoyancies that expose different amounts of surface to the wind and travel at different speeds and different trajectories. The model therefore now includes different levels of wind-forcing, simulating the movement of different types of floating debris.

No formal marine debris observing systems exist to verify the model simulations. The model paths for tsunami debris, however, agree with reports of such debris washing up on the shores of Oregon, Washington, Alaska, and the Hawaiian Islands, as well as with observations by sailors crossing the North Pacific.

IMAGE: Many oyster buoys from Japan, such as the one here that washed up on Kauai, began to arrive on the windward shores of the Hawaiian Islands in October, 2012.

The first physical evidence of tsunami driftage far from the coasts of Japan, for example, came in September 2011 from the Russian sail training ship Pallada. The captain had been forewarned that the ship might run into a tsunami debris field on its voyage from Honolulu to Vladivostok. Sailors, alerted and on the lookout, sighted much debris just northwest of Midway, and picked up a little fishing boat later confirmed lost in the tsunami.

The model predicted both the timing and the type of material that has washed up along windward shores of Hawaii: the first tsunami driftage came in August – September 2012, about 1½ years after the tragedy. These were very buoyant pieces, for example, oyster buoys, crates, small fishing boats like the one picked up by Pallada, and parts of small refrigerators.

Then 2½ years after the tsunami, materials sitting lower in the water and less buoyant than the previous driftage arrived: poles and beams with mortise and tenon features. Experts on lumber, who have analyzed cross-cuts of several of these wood pieces, agree that it is Sugi, a species of cypress endemic to Japan. One piece of wood is of very old timber and must have been cut 100 or more years ago.

The IPRC Ocean Drift Model has recently shown to be useful in another dramatic event at sea: validating the El Salvadoran castaway’s ordeal. In January 2014, Jose Salvador Alvarenga washed ashore in the Marshall Islands after enduring a 13-month journey from the shores of southern Mexico. The paths of floating objects in the IPRC Ocean Drift model, driven with the currents and wind conditions, lend strong support to this rather improbable odyssey. 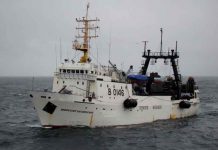