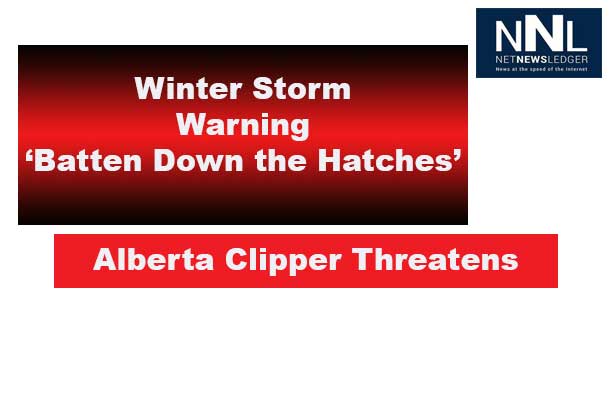 THUNDER BAY – Batten down the hatches! A potential major winter storm is headed to Northwestern Ontario. Environment Canada is reporting that “An Alberta clipper and a Texas low are expected to develop by this evening and then both will track towards the Great Lakes Thursday. Latest indications suggest both of these weather systems may merge into a major winter storm by Friday which may then track across the Great Lakes and northern Ontario into Hudson Bay.

This may set the stage for quite a potent and large winter storm by Friday. Significant amounts of snow are possible for northwestern Ontario which should remain in the cold Arctic air throughout the storm.

Over northeastern Ontario, precipitation will probably start as snow then may change through ice pellets and freezing rain to rain, with the greatest chance of a changeover to rain near the North Shore of Lake Huron and Georgian Bay as milder air tries to move in for a short visit by Friday morning.

Much colder Arctic air will quickly return to all districts by Friday evening as very strong and gusty winds blast a cold front quickly through to the east of the province.

This winter storm has the potential for significant impact on travel beginning tonight as snow spreads into northwestern Ontario.

Such winter storms typically produce 15 to 25 cm of snow on their cold northwestern side. On the milder eastern side of the storm, a coating to 10 cm of snow plus 10 to 20 mm of rain along with ice pellets and some freezing rain often occur. Very strong winds in the wake of this winter storm centre may also be an issue by Friday.

There is still some uncertainty as to the exact track of the storm centre. This will affect the location of the heaviest snow and how far north the freezing precipitation and rain reach into northern Ontario.