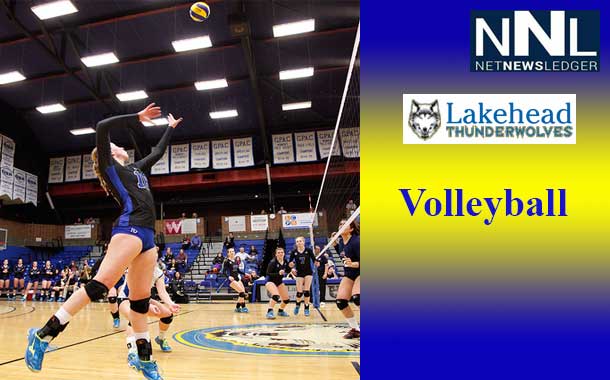 THUNDER BAY – Sports – The Lakehead University Thunderwolves Women’s volleyball team gave it an amazing show of skills in a tight loss. Fans in search of great volleyball weren’t disappointed in Friday’s game, despite the Thunderwolves losing 3-2 to the Brock Badgers in a hotly contested affair (23-25, 25-23, 17-25, 25-21, 14-16).

It what was coined as a defensive battle unfolded in front of the Lakehead faithful, as both teams spent the first two sets figuring out their offensive strategies. Neither team gave up much on defense, the first two sets being stretched to the limit, Brock taking the first then Lakehead the second by identical 25-23 scores.

Some mental breakdowns in the the 3rd set made for the quickest of the evening, while Lakehead dug deep in the 4th set, down 21-17 before going on another 8-0 run to close out the set and force a 5th and deciding frame.

The game came right down to the wire in the 5th, with Lakehead fighting their way back, this time down 11-7, to tie the score at 13, take the lead 14-13, but then surrender the final 3 points of the match to the Badgers.

Left side Jasmine Fox (Brunkild, Man.) had a career-best 21 kills with 5 digs and 1 block for 22 points. Jorie Daymond notched 15 kills while Sarah Reid had 14 kills on the night.

Setter Sara Hudson made 51 assists on the game with 6 digs and 5 kills, and libero Breanne Hilhorst made 17 digs on defines.

For Brock, Lucy McLay made 14 kills while Maddie Brown had 10 kills with 6 blocks for 16 points. Setter Lauren Stirling made 41 assists and 11 digs for the Badgers.

Coach Chris Green stated, “First off, we are proud of the girls. After last weekend deserving a better fate, tonight we deserved a much better fate because of how we played. The girls worked hard this week in practice to clean up errors and they did for most of the game. I think Brock and ourselves are very similar teams and we knew this would be a long, tough match. But as coaches, we loved our fight and tenacity and good things will be in store if we keep this up. Full marks to our outside hitters who were amazing tonight. Our Libero again proved she is one of the top Liberos by her performance and Hudson distributed the ball well tonight. Full marks to Brock for their night tonight. We will get back at it tomorrow and look forward to another exciting match.”

The two teams will battle again tomorrow evening at 7pm in the Thunderdome.