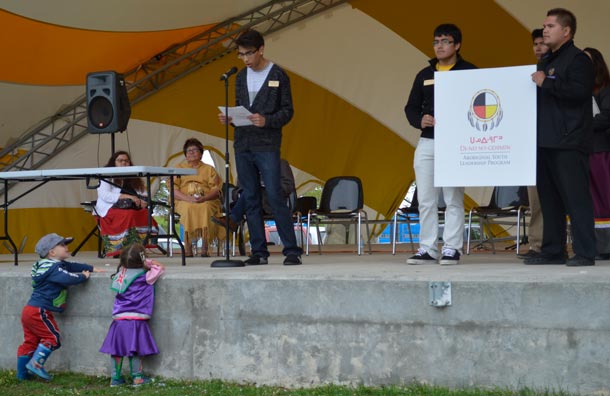 Nipissing First Nation – Anishinabek Nation Chiefs have unanimously rejected the federal government’s draft proposal of the First Nations Education Act because, in the words of Grand Council Chief Patrick Madahbee: “We need to show the government and the world that we can do the job of educating our children.”

Chiefs responded to presentations by members of the Education Working Group and the Youth Council who urged them to work collectively for the future of Anishinabek Nation children.

“Our leaders appreciate the support we received from our community members to continue developing an Anishinabek Education System,” said the Grand Council Chief.  “Yes, the government is breaching our legal and constitutional rights with their ongoing legislative assault against First Nations. But in the final analysis, this is about our inherent and treaty rights to provide our children the type of education most likely to help them succeed.”

Chiefs unanimously endorsed a resolution “vehemently” condemning the FNEA as “an unwelcome intrusion into Anishinabek Nations inherent jurisdiction”, and directing staff to continue developing the Anishinabek Education System that has been a source of negotiation with Canada for 19 years.

The move is similar to the declaration by Nishnawbe Aski Nation Chiefs at the Education Summit in Thunder Bay last week.

“There simply cannot be second-­‐class education systems in a country that calls itself a democracy,” said Madahbee.  “We have our own solutions for Anishinabek Education System.”

The announcement follows on the Nishanawbe Aski Nation declaration last week with NAN Chiefs in Thunder Bay standing with students on the issue of education.

The Nishnawbe Aski Nation Declaration on Our Inherent and Treaty Right to Education was endorsed by Chiefs-in-Assembly following three days of meetings by more than 200 delegates at Chiefs Summit on Education in Thunder Bay. The Declaration rightfully claims that the Government of Canada shall:

Over the past few weeks NAN has met with many municipal leaders to express NAN’s interest in developing collaborative working relationships to advocate for Northern communities, both native and non-native, with a strong regional voice.

How to learn English quickly and easily