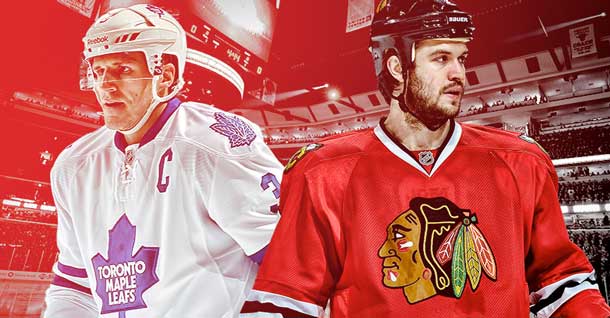 CHICAGO – NHL – Toronto Maple Leafs and the Chicago Blackhawks will take to the ice tonight in a classic six hockey battle. The puck drops at 6PM tonight.

From Thunder Bay you will have to tune in to watch the game. There are no direct flights via Porter Air to Chicago on Saturdays. There is a flight to Toronto and then a connection to Chicago but you would only have 5 minutes to connect.

After Friday’s practice, it might be a new look ‘Hawks team facing off against the Leafs. Head Coach Joel Quenneville gave his forward line combinations a new look. The coach has separated the Bryan Bickell-Jonathan Toews-Patrick Kane trio. That was the ‘Hawk’s best line late in the 2013 postseason.

If the combinations hold for tonight’s game against the Toronto Maple Leafs, Toews will center a line withBrandon Saad and Marian Hossa, who was given the day off, and Kane will join a line with Patrick Sharp and Michal Handzus. Coach Q hopes putting Toews and Kane on different lines will give opposing coaches more to contend with when setting their matchups. “It gives the other team a lot to be concerned with,” said Quenneville talking with media after Friday’s practice. “Who do you want to check? Who do you want to play against?”

The Blackhawks brag an incredible depth of offensive power in the NHL.

The ‘Hawks have seen goals netted from twelve different players in seven games. Chicago has started out the young season in the middle of the pack when it comes to scoring, tallying 2.71 goals per game, good for 16th in the league. However, Coach Q believes that “Tt is only a matter of time before the talented offense gets into high gear, and one good game could make all the difference”.

“We’ve got a lot of talent in this locker room, so nothing’s going to change there. Scoring just comes from confidence; it comes from getting the results you want and seeing the puck go in,” Toews said. “When that happens, you build off it. You feel that you can play loose and just let things happen. When that starts happening a little more naturally, I think the rest of our game will come along, too.”

From the Maple Leafs

The Leafs had both James Reimer and James van Riemsdyk at practice Friday as Toronto prepared for Saturday’s game. Head coach Randy Carlyle says there is “A good chance both will be able to play in Chicago”.

After leaving Thursday’s game, Reimer admitted that the team doctors played it safe and kept him out the game.

Blackhawks dazed and confused as their gameplan crumbles