HAMILTON – LU SPORTS – The women’s volleyball team was back in action this afternoon at the McMaster Invitational, resulting in a 3-2 win over the RMC Paladins (25-23, 22-25, 25-11, 23-25, 15-6). As Head Coach Chris Green put it, “This game was a ‘must-respond’ game. After yesterday playing one of the worst possible games we could play, today was about redefining who we are.”

Rookie Katie Maclennan was strong from the service line, scoring 4 aces (with 4 kills and 2 blocks) for a total of 10 points.

Setter Vanessa Masters made 32 assists in the win, along with 2 blocks, an ace and 1 kill to her credit.

Defensive specialist Breanne Hilhorst made 27 digs and 2 assists of her own as well.

“We had large leads in the 1st and 2nd sets. We managed to hang on in the 1st but in the 2nd unfortunately gave up a 9 point run to RMC making the game closer than it had to be,” stated Coach Green. “Clearly RMC had the wherewithal to mount a comeback and we made horrendous choices to lose the lead. The 3rd set saw us take a commanding lead and not relent”.

In the 4 set RMC went on a big early run, 6-0. After using all of its time-outs and 6 substitutions, Lakehead battled down the stretch to tie the match at 23-23 following an 8-point run of their own. An unforced Thunderwolf error gave RMC the chance to serve for the set.

Lakehead came out in the 5th set with the desired response and controlled the entire set.

Green remarked, “I am satisfied with one thing: We came out today and showed we are a good team who can compete, when we focus. I am not impressed with the negative point runs, yet we survived them. Kudos to the entire team for contributing to a victory, and I feel the young players learned a lot about the game and their roles. Some of the experienced players also grew today. It was nice to Jen Casey take a step ahead in her game’s maturation. We attacked with 13 aces this game as we talked prior that we had to make our serving a bigger factor. Now we will see what Brock brings tomorrow.”

With the win the T-Wolves are now 1-1 at the tournament and will play for 5th place tomorrow at 10:00am against the Brock Badgers. 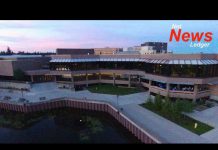