In two games this past week the 19-year-old Thunder Bay native registered eight points in those outings helping the 3-0 North Stars remain unbeaten early on as they skated to a pair of road victories.

Wolframe began his offensive outburst this past Tuesday by scoring once and dishing out three assists in an 8-2 romp over the Minnesota Iron Rangers. He then followed that up by tallying twice and adding two more helpers in a 6-4 triumph at Wisconsin Friday.

His efforts allowed him to move into a second place tie for the SIJHL scoring lead with those eight points. Wolframe is also knotted for second in league assists with five.

The Thunder Bay North Stars will host their home opener at the Fort William Gardens on October 15th against the Dryden Ice Dogs.

At the conclusion of the regular season the SIJHL’s most valuable player will be presented the Pizza Hut player of the year award and will also go on to be the league’s representative for the national Canadian Junior Hockey League player of the year trophy. 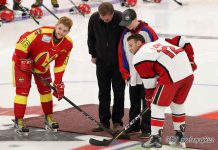