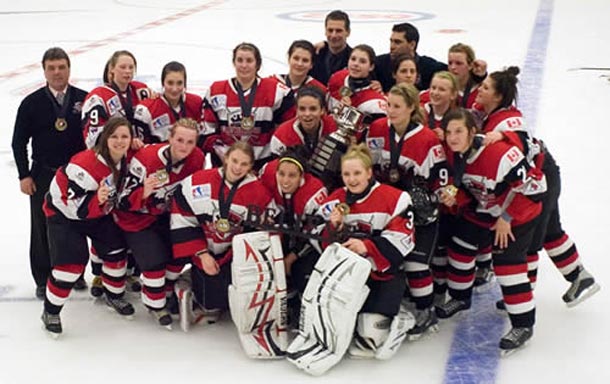 THUNDER BAY – Sports – The Thunder Bay Sportop midget AA Queens are off to a tremendous start at the 2 Nations Tier 1 Elite Showcase in Exeter, N.H. after posting a pair of opening day victories.Game 1 of the day saw Thunder Bay stop the Shaftesbury Prep Titans of Winnipeg 3-1 and followed that up with a convincing 9-1 romp over the Dallas Stars.

Against Shaftesbury the Queens got goals from Emily Oleksuk, Samantha Strassburger and Kaley Tienhaara.

Jayde Tucotte was stellar in the Thunder Bay net keeping the Titans off the board until the final minute when they dashed her shutout bid.

Strassburger also set-up four other markers for a five-point night with Tienhaara having three helpers of her own to aid the offensive cause.

Sydney Isbell was in net to pick-up the victory stopping 13 of 14 shots she faced in a game that saw her side fire 30 pucks on the Dallas goaltender.

Thunder Bay returns to game action Saturday with two more contests as they’ll take on the Pittsburgh Penguins Elite at 10 a.m. followed by a 6:40 p.m. encounter vs. the Milwaukee Jr. Admirals.

The squad then rounds out competition Sunday at 8 a.m. against Team Detroit from Michigan.