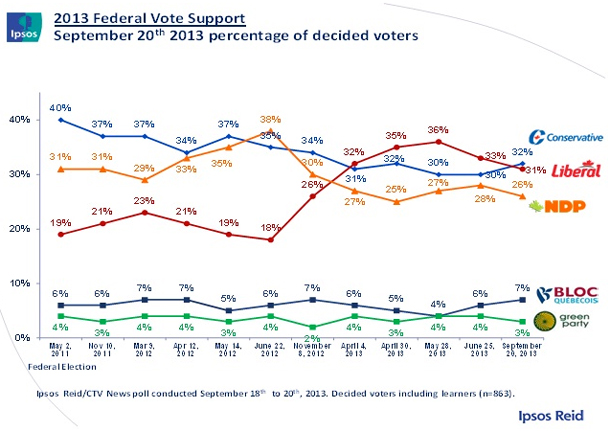 TORONTO – Canada’s federal political scene has shifted into a very tight three way race. The three major national, federal parties continue to be in a three-way race according to a new Ipsos Reid poll conducted on behalf of CTV News.

The six-point lead enjoyed by the Liberals in May has evaporated as the honeymoon period for Justin Trudeau appears to be officially over according to Ipsos Reid. “If an election were held tomorrow, the Conservatives under Prime Minister Stephen Harper would receive 32% of the vote among decided voters, up 2 points since the end of June. In a statistical tie, the Liberals under Justin Trudeau would receive 31% of the decided vote, down 2 points since June. Thomas Mulcair’s NDP would receive 26% of the vote, down 2 points. The last 15 months have been among the most volatile witnessed in modern Canadian political history, which each of the three major parties having at one point been in the lead position. Further, since the election of Justin Trudeau as leader of the Liberals, a three-way race has been maintained”, shares the pollster.

The federal Conservatives have not attempted to frame Justin Trudeau like they did to former Liberal Leaders Stephane Dion and Michael Ignatieff. The Conservatives appeared either unsure of how to frame Trudeau, or felt that he would frame himself.

That approach may have worked, based on the six point fall in the Liberal support.

However the Liberals and New Democrats have shifted positions. The Liberals have maintained their position in second spot behind the Conservatives.

One demographic that the Harper Conservatives appear to have the clear advantage is with potential voters born outside of Canada. Among decided foreign-born voters, the Conservatives (37%) have a noticeable lead of 10 points over the Trudeau-led Liberals (27%) and a 12 point lead over Thomas Mulcair and the NDP (25%), while the Greens (7%, up 4 points from national average) are also do better among this demographic, and the Bloc (4%, down 3 points) fair a bit worse.

This compares favourably for the Harper Conservatives in contrast to the Canadian-born vote, which is much more reflective of the three-way national horserace. Among Canadian born voters, the Liberals (32%) and the Conservatives (31%) are statistically tied, while the NDP (26%), Bloc Quebecois (7%), and Greens (3%) are in line with their overall national averages.

The Impact of Turnout…

History suggests that roughly four-in-ten Canadians won’t go out to the polls on Election Day. When analyzing the national results among the 54% of Canadians who say that ‘nothing short of an emergency could stop me from getting to the voting booth’ and casting their vote during the next election (likely not held until 2015), the results are similar but the NDP vote softens slightly while the Liberal vote strengthens: 32% Liberals, 31% Conservatives, 25% NDP, 8% Bloc, 3% Green. While the election date is still far off, it’s clear that party organization and a solid get-out-the-vote effort will be critical to victory in the next campaign.

Six in ten (62%) Canadians ‘agree’ (40% strongly/22% somewhat) that ‘it doesn’t matter to me what Stephen Harper and the Conservatives do between now and the next federal election, there’s no possible way I could vote for them’. Four in ten (38%) ‘disagree’ (20% strongly/18% somewhat) with this sentiment, suggesting that the Harper ceiling going into the next election could be around 38%.

Presented with a list of 10 possible issues, three in ten (30%) Canadians say that the economy is the issue that they believe should receive the greatest attention from Canada’s leaders – and undoubtedly it has received the lion’s share of attention from the governing Conservatives. In second place is healthcare/Medicare (19%) and in a close third, jobs and unemployment (18%), which is also largely an economic issue.

Following at a distance, and rounding out the list, are: the environment (8%), social services (7%), education (5%), poverty (5%), crime/justice (3%), international affairs (1%), trade (0%), or some other issue (3%). Once Canadians identified their most important issue, they were asked which party they believe is best able to manage that issue. The Conservatives are perceived as the best economic policy managers among those who think the economy is the most important issue, but Liberals and NDP are more competitive in most other areas.

The Tories are leading in two categories, the Liberals in two, the NDP in one and the Green Party in one. This suggests that the three-way race will continue to be competitive, so long as the opposition parties can draw attention to other important issues and not just the economy. The Tories, though, continue to lead on the issue that is most important to Canadians – the economy – which likely explains why they’re still competitive despite being further behind in most other issues, with education being the exception.

While he’s still relatively new as leader of the Liberal Party, most (69%) Canadians believe that The Liberals led by Justin Trudeau have the best chance of defeating the Harper Conservatives in the next election, while just one in three (31%) believe the NDP led by Thomas Mulcair has the best chance of kicking the Tories out of the government benches. In fact, four in ten (41%) current NDP supporters believe it is the Liberals who have the best chance of defeating the Tories, suggesting that, if the goal of current NDP supporters is to defeat the Tories, many could end up changing their vote to Liberal to try and achieve that goal.

A Fight for the Middle Class…

Canadians were asked which party and leader they believe best understands pressures on middle class families. In this regard, Thomas Mulcair and the NDP (38%) came out ahead, followed by Justin Trudeau and the Liberals (30%), Stephen Harper and the Conservatives (26%) and Daniel Paille and the Bloc (5%). But on the issue, specifically, of being the most likely to come up with the best policies for middle class families, the race tightens: NDP (34%), Liberals (33%), Conservatives (26%) and the Bloc (7%).

Canadians are split on the best approach to help middle class families. A slim majority (56%) believe that the better approach is ‘a general tax cut they can decide how to spend or save themselves’, while 44% believe the better approach is ‘targeted government benefits to help them deal with expenses like childcare, post-secondary education, and skills training’. While the Conservative government began its tenure with the former (such as the reduction in GST), in recent years it has engaged in more of the latter.

Thinking about the biggest reason why governments at all levels in Canada face financial problems these days, two in three (68%) Canadians more closely believe that it is because there exists ‘incompetence in the way government manages and spends the taxes they already get’, while one in three (32%) think it’s because government is ‘not taxing wealthy people and business enough’.

Trudeau and Marijuana Use…

A majority (62%) of Canadians ‘disagree’ (37% strongly/25% somewhat) that ‘Justin Trudeau’s use of illegal marijuana while he was an elected Member of Parliament just three years ago raises serious questions about whether he really has the maturity and judgement to be Canada’s next Prime Minister’. Just four in ten (38%) ‘agree’ (19% strongly/19% somewhat) that it does.

Those most likely to agree that it raises questions for them include those over the age of 55 (46% agree), those in Alberta (46%) and Ontario (44%), and, or particular interest, those not born in Canada (52%). Just 16% of Liberal voters agree that this raises questions in their mind, compared to 34% of NDP voters and 64% of Conservative voters who say the same.

What is clear, in light of the relative consistency in the federal horse race numbers over the past few months, is that the impact of this issue on Trudeau’s level of support has been negligible.