The bill will establish a Financial Accountability Office, which will have sweeping powers to review government estimates and spending plans before any money is spent. Following spending scandals such as E-Health, ORNGE and the cancellation of gas plants in Mississauga and Oakville, Ontarians told us they were fed up with reckless government spending. As a result, the establishment of this office was one of the NDP’s key conditions for passing the 2013 budget.
Given that the establishment of a Financial Accountability Office requires legislation, the fulfillment of this promise is easy to measure. The implementation of other promises, including those related to home care and auto insurance, will require vigilance to ensure the government lives up to its promises.
In August, the province instructed the Financial Services Commission of Ontario to begin reducing premiums beginning in January, with premiums set to be reduced by eight per cent by next August and the full 15 per cent one year later. While it will be easy to measure the overall success on an individual basis by seeing if premiums are lower than the previous year, measuring its overall impact will require vigilance. That is why I encourage you to let me know, starting in January, if your annual premiums have indeed gone down as the government has promised. Holding the government to account for the success of this policy is essential, not only because the break in premiums is needed, but because fulfilling the promise is essential in order to restore people’s faith in government.
‎Similarly, I need to hear from you regarding the success or failure of the government’s promise to reduce wait times for home care. Like auto insurance, access to home care services was identified as a high-to-very-high priority in the vast majority of returned budget surveys that were sent out last spring. While wait times in the southern part of the province have been reasonable, people in the Northwest have been waiting months, or being denied service altogether, due to the shortage of home care workers in our region.
Whether it was individuals in Rainy River being denied service because they had access to a vehicle, or individuals hospitalized in Sioux Lookout when they could be receiving care in their home at a fraction of the costs to our healthcare system, individuals across the Northwest sent a loud and clear message that service needed to be improved.
I voted in favour of passing this year’s budget based on the inclusion of promises to act on issues important to you. Getting the government to make the necessary promises is the first step, now we need to work together to ensure they deliver.
Are you waiting for home care services, or have you been denied access? Has the wait time decreased? Are your auto insurance premiums set to go down? Or are they going up this year? Share your stories, thoughts, opinions and concerns by emailing or writing me at my community office. To be your voice in Queen’s Park I need to hear from you! 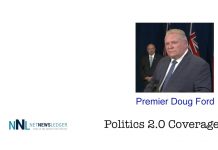