The President’s reaction and response to the storm was seen as ineffective.

Hurricane Katrina also gave birth to NetNewsLedger. The storm changed many lives, and from a personal level, although I had never been in New Orleans, and have never been through a hurricane, it was through writing and reporting on that horrible event, and witnessing how the Internet could be used as a tool for reporting that NNL was founded.

Eight years ago, my plan was to attend Confederation College. That plan was interrupted because of an email. That email was from a person in a small community on the Gulf Coast of the United States. They had prepared a list of where the people in their community of fifty-six people were going. The young woman asked if I could publish that list for her.

At the time, I didn’t really know how, but felt it should be done. I opened the Microsoft Excel spreadsheet, and went to save it. It was saved in an html format, and put online. That opened the floodgates to a huge number of similar requests. I ended up, sitting with a Sony Vaio Laptop on my knees, building a team of about twenty people from around the world, and we focused on creating a missing persons list from New Orleans.

We ended up with a pretty massive list, and when the project was taken over by the ‘Katrina Scrapers’ and master lists were generated, we were the 13th largest list, one behind CNN. Right then and there I realized that while education is important, perhaps time could be better spent doing rather than learning to do. 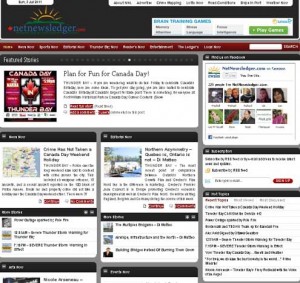 In the early days, NNL was basically hand-coded. I wrote the css, and formatted each article individually. It was, in today Internet terms almost the same as back in the days when a newspaper was put together with individual pieces of type.

NNL moved, first to Joomla, and then to WordPress. The look and feel and scope of the site has continued.

NetNewsLedger has moved forward, building and innovating, and doing new things all the time. First working with videographer Paul Morralee, we did the first live Internet broadcast of a Thunder Bay City Council Meeting. Those tests were done at the Italian Cultural Centre while construction of the new City Hall was underway.

In a way, in August, returning ‘home’ to the Italian Cultural Centre to do the World’s First Broadcast of a Festa Italiana was really special. It brought NNL full circle in many ways.

There are many ‘firsts’ that NetNewsLedger have accomplished in the eight years since we first started publishing in Thunder Bay.

They include the first ever Live Stream broadcast of a Pow Wow in Northwestern Ontario. The Lakehead University Native Students Association (LUNSA) was willing to work with NNL two years ago to do that. The students, and the Elders were willing to take a technology leap forward with us, and it is a move that I believe helps to forge friendships and teach tolerance in our city and region.

If you watch those early Livestream Videos, and compare them to the evolution, at the ‘Speed of the Internet’ that is happening, what we are doing is moving from recording events to broadcasting events that are very similar to watching them on your television. As we continue to move forward, one of our goals are to be taking you inside more live events across the city.

One of our goals has been to take the ‘sound bite’ out of the reporting of news. That is where our ‘Leader’s Ledgers’ and our HD Livestream+© come in. When we cover an event, and stream the entire presentation, like the Thunder Bay Chamber of Commerce / Cliffs Natural Resources Luncheon with Minister Greg Rickford earlier in August, we are able to share with you the whole event.

We have done that earlier with the Mayor’s State of the City Address.

Moving the production side forward has come with the amazing help of many people. We have had helpers, volunteers, and dedicated people helping to build NetNewsLedger.

Looking forward, in many ways having NetNewsLedger.com born out of a hurricane is likely not a bad thing. As we have moved forward, there have been many times when things have been stormy. However we have never lost sight of the key goal, and that is to bring to you, our readers and now in many cases, our viewers the news and information you need to now. ‘News at the Speed of the Internet©” is our goal and promise to you.

We were born in a storm, we have matured in a storm, and we are reporting to you about the storms of our world and region!

It is what we are all about.

The real truth however is we could not do it with out you.

And for that, from the bottom of my heart, a heartfelt thank you.

Some Memories as We Grow

As we have grown, there have been times the news desk has had special people take over. After all the future of the entire region is in the hands of the youth.

We have formed a special bond with Camp Quality Thunder Bay… Thank you Clara!

The First Nations Community has a key and integral role in our future. May all the ladies be “Oji-Steel” like this young lady.

We will bring you news and information sometimes long before anyone else!

News at the Speed of the Internet©