FOLEYET – The Grand Opening of a new EMS station in Foleyet was celebrated on July 26th, 2013. Les Gamble, Chair of the Manitoulin-Sudbury District Services Board reports that “the Grand Opening of the Foleyet EMS Station was a good community event, and was well attended by residents of Foleyet”. Attendees were treated to a barbecue as well as a tour of the new station.

The Manitoulin-Sudbury DSB Emergency Medical Services has a coverage area of approximately 43,000 square/kms in size. This is an area larger than most countries. The EMS base in Foleyet is in a strategic location, situated between Chapleau and Timmins on Highway 101. Foleyet has a little over 200 residents living in the immediate town. In surrounding areas there are a number of mines and logging sites, all of which require access to emergency medical services. The population in this area increases in the summer months due to camping and tourism driven by outdoor recreation activities.

Fern Dominelli, CAO of the Manitoulin-Sudbury DSB, stated, “Discussions about building the new Foleyet station began in late 2009. At that time, there were concerns about the setup of the old Foleyet EMS station, which was also in need of some renovations”. The ambulance was stored at the Foleyet Fire Hall, located half a kilometer away from the station, which caused a delay in EMS response times.  “These accommodations were practical for a time, but there was a growing need for attracting new permanent staff and to improve ambulance response times”, says Michael MacIsaac, Chief of EMS for the Manitoulin-Sudbury DSB.

Fern Dominelli expressed with pride “The new station has an 800 square foot garage and 1,200 square feet in living space, including a crew room, a kitchen, 2 bedrooms, and an office”. It’s important to have beds and living spaces in EMS stations, especially at remote stations like the one in Foleyet. There are no local paramedics, meaning that staff have to travel and stay at the base for their work weeks. There are currently 2 full time staff and two regular part time staff working at this base. The on site hours are between 8 am and 4 pm.

The “on call” hours, from 4 pm to 8 am, require paramedics to carry a pager and to be within 10 minutes of the ambulance. For these reasons, Chef MacLsaac says,  “The station is not only a work place, the paramedics also call it home”. 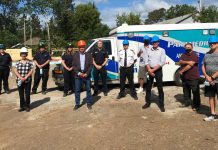