WHISTLER – Sports  – As the sun broke through the clouds in Whistler, it was a rider’s slopestyle paradise for Red Bull Joyride as the eighteen competitors threw down massive tricks and some unique lines in front of a 25,000 strong crowd, one of the largest turnouts for a single event in Whistler’s history. This year’s brand new course design fused elements of dirt jumping, slopestyle and classic North Shore mountain biking. With twelve trickable features, it was one of the longest slopestyle courses ever built.

[sws_pullquote_right] Pushing the boundaries of slopestyle mountain biking once again, Red Bull Joyride descended the Whistler Mountain Bike Park today as the exhilarating, gravity-defying anchor event of the Crankworx Whistler Festival. Eighteen of the world’s best athletes could not be held back in front of a high energy crowd of more than 25,000 spectators, with local hero Brandon Semenuk securing top spot on the podium, followed by Sweden’s Martin Söderström and UK’s Sam Pilgrim. [/sws_pullquote_right] Big tricks and plenty of clean runs blew the judges away, but it was 23 year-old Brandon Semenuk of Whistler, BC who reclaimed the podium’s top step after his first win in 2011 with the highest score ever recorded at this event. Sweden’s Martin Söderström took second place, followed in third by Sam Pilgrim from the UK. The Canadian’s second run set the bar for the day’s event as the cleanest and most technical, earning him the highest score in Joyride history. Martin Söderström threw down a clean triple tailwhip in the middle of his second run, the only rider to attempt that trick on the course. Local hero Semenuk and the Brit Pilgrim both backflipped off the Red Bull Joyride cabin, a significant trick that very few riders are capable of doing.

“After the fall during my first run, it was a bit of a flashback to 2011 and 2010 having bailed on the same trick. I was able to regroup and have a fresh start going into my second run and that really paid off. Being back in my hometown in front of my friends and family, I wanted to put together the best run I could possibly think of and get the win at home,” said today’s best rider.

Each year at Red Bull Joyride, the level of talent continues to grow as slopestyle mountain biking evolves into one of the fastest growing mountain bike disciplines in the world. “This year was definitely the best course yet, flowing really well and lots of fun to ride,” commented Semenuk. “The features were a good size but not so big that you couldn’t show off your biggest tricks”. The course catered more to technical riders than speed demons, allowing more time to set up for tricks and complete plenty of runs from top to bottom.

The enthusiastic crowd was completely taken aback by what even the youngest competitors pulled off at the event, including 19 year-old Anton Thelander of Sweden who walked away with the event’s Breakout Award.“The feeling of being selected for the Breakout Award is really insane. I didn’t expect to be in that position,” said the happy Award winner. 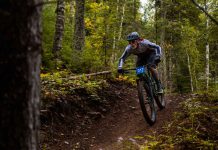