THUNDER BAY – Although rain in the forecast is expected to drop the forest fire hazard to low across the Northwest region on July 22, prior to that there were three new fires confirmed by early evening on July 21 and more reports were being checked. There was also one new fire reported July 20.

The July 21 fires included two in the Kenora District and one in the Sioux Lookout District.

Kenora Fire 035 is 0.1 hectares in size, located on an island on Lake of the Woods about 30 kilometers south of Kenora. It is being monitored as it burns and renews the island ecosystem.

The July 20 fire was Sioux Lookout Fire Number 048. It is a being observed at 0.1 hectares in size and is located about 26 kilometers south of Kingfisher Lake.

While Kenora District picked up new fires, it also declared Kenora Fire 031 out. This 1.0 hectare lightning-caused fire started on June 26 and was monitored as it renewed the ecosystem in the Lake of the Woods Conservation Reserve south of the Aulneau Peninsula.

Sioux Lookout District also called a fire out – fire number 046 was a 1.0 hectare lightning-caused fire that started on July 18.

An earlier fire of note, Red Lake Fire Number 024 is classed as being held at 300 hectares in size. Located about 40 kilometers northwest of Red Lake, this lightning caused fire is showing a minimal number of hot spots through infrared scanning and demobilization of crews has begun on this fire.

Work continues on Red Lake Fire Number 031. Lines are holding and firefighters continue to patrol for hot spots to put out. Fire behaviour forecasts do caution that the risk of active fire remains in mature Jack Pine and in storm damaged forest fuel existing on the fire. The potential for flare ups will grow under gusting winds and as the area dries out.

Provincial support continues with the firefighting efforts in the Northwest Territories, Manitoba and Quebec. Additional crews and overhead staff are expected to be deployed to Quebec on July 22.

Information is available on safe outdoor fire management at http://www.ontario.ca/fireprevention 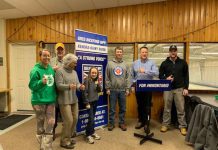 All Weather Road to Renard Diamond Mine Opens