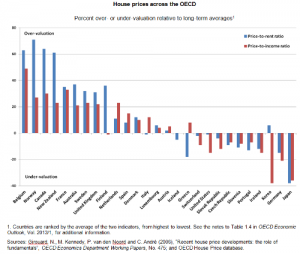 Thunder Bay- Real Estate– Canada has been ranked #3 in the World Real Estate House Prices by OECD slightly behind Belgium and Norway yet ahead of France #5, England #8, Italy #13 and the USA which came in at #19 in affordability.  The International real estate watchdog expressed concerns in the event that interest rates started to rise resulting in much higher monthly mortgage payments.

The Canadian real estate market is effected mostly by supply and demand yet the Bank of Canada’s benchmark interest rate is not expected to rise until late 2015.

The global real estate rankings are measured every year by the OECD which uses two measurements of valuation to calculate and determine if residential real estate prices are overvalued or undervalued. First are price-to-rent and price-to-income ratios to determine the profitability and affordability of home ownership in each country.

Using this calculation method Canada now ranks behind Belgium and Norway, and ahead of New Zealand, France, Australia, Sweden and England..

At the opposite end of the global real estate charts ranks the world’s most undervalued real estate ending with Japan as the lowest and rising slowly with Germany, South Korea, Ireland, Portugal and Slovenia. Japan depressed real estate market has been hit hard by the tsunami crisis and mass evacuation resulting in over supply and vacant homes along high level tsunami warning danger zones

Real Estate prices in the United States, Italy and Austria are at the correct ratios of affordability according to the international ranking methods released by the OECD.

In Germany and Switzerland the homes appear expensive yet are undervalued according to the affordability of their respective markets. This is due to the high gross incomes of the local markets which are above most of the other countries which may result in rising real estate prices. Countries Australia and other regions of Europe like Spain and England are extremely overvalued with pressure on lower home prices.

Canada, Norway, New Zealand and Sweden seem to be in another level as home prices are high and seem to be climbing higher according to the analy

The OCED is concerned that  “ Global Economies in the high price category and rising are at risk of a possible price correction if mortgage interest rates suddenly rise and the corresponding borrowing costs were to rise or salary and family income growth were to slow.”

Canadian Finance Minister Jim Flaherty brought in his latest mortgage restrictions to cool the market, prices have still generally held up but the Canadian real estate market has definitely cooled in most parts of the country especially in the major centers like Toronto and Vancouver which are the two largest and most active real estate markets in Canada.

Vancouver is still down overall  by 4.3% yet  the first gain since September of 2011 and a full 19.4 % down from Vancouver 10 year average. Due mainly to the massive 31-per-cent decline last year said senior economist Sal Guatieri of BMO Nesbitt Burns. He also stated “ a hefty 18-per-cent year-over-year decline in new listings appears to have put a floor under current prices while stronger economic cities like Calgary had housing sales up almost 7 per cent in May.

Due to the rising Canadian economy the buoyant Canada’s residential real estate market appears to be sailing along as long as interest rates stay low and the global economy continues to pick up steam. If Toronto of Vancouver can muster a mere 5-per-cent price correction then the  rest of the Canada should not have to worry unless Finance Minister introduces even tougher mortgage regulations.

Thunder Bay real estate prices continue to remain strong with many recent home prices selling for above listing prices resulting in bidding wars on many Thunder Bay properties. This is due to a combination of pent up demand, expanding employment market and many years of holding the distinction of having the lowest prices in Canadian real estate. The Thunder Bay real estate market is now catching up to the rest of the Canadian market yet still well below prices in Toronto and Vancouver which consider the price of a resale home in Thunder Bay to be very affordable.

Statistics Canada reported a 10.5%  rise in  building permits issued across Canada which is the fourth monthly increase in a row. Most of the rise was credited to  developers multi-unit construction, as in condos and apartments, in Ontario, British Columbia and Quebec.