FORT WILLIAM FIRST NATION – Fort William First Nation has stepped up after another incident of off roaders damaging property on their lands. Effective immediately, off roading in no longer allowed on the First Nation. The move comes after a weekend incident where not only were the Pow Wow grounds desecrated, but a grandmother and her daughter and grandson were threatened by one of the off roaders. 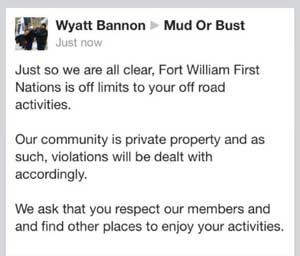 The culprits in this incident have been apprehended by police, according to reports.

The Facebook Page ‘Mud or Bust’ is one of the places that off roaders in the city gather. The Fort William First Nation has now informed the group that they are not welcome.

The Pow Wow grounds have been a place where disrespectful people have chewed up the traditional area before. Last March another report of the grounds being damaged did not result in a banning of off roaders, this year the threatening of a community member and the damages to the FWFN lands has brought solid action.

It is a case where the fun and enjoyment of a large group of off-roaders have been spoiled by the actions of a small number of people who failed to show proper respect to private property.

Wyatt Bannon shares, “I’d like to add the the Land between City Rd and the Kam River is owned by The Members of Fort William and is also Private property and again off limits.”

Fort William First Nation has extended the ban to the former Mount McKay Ski hill and all lands on the First Nation. No Trespassing Signs will be posted soon.

The original image in this story, was of an off roader in Current River. That individual was not involved in the situation at Fort William First Nation, except to have arrived afterward and assisted with police to put the vehicle out of the mud.