Heavy rains south of Thunder Bay have impacted the region.

Many of the roads in the area have been washed out or are water covered.

Chief Morreseau states, “We are currently assessing damages. Families, Elders and those with medical needs are a definite priority”.

“We have declared a state of emergency and currently working on emergency response plan. Volunteers are greatly appreciated. We have people going door to door delivering notices which include emergency contacts”.

The Chief adds, “We will continue to provide updates as we progress along”.

When an emergency occurs or may be imminent within a First Nation, it is the responsibility of the Chief and Council of the First Nation to utilize all available local resources to respond to any situation that results in a present or imminent threat to life, property or the environment in their community.

The Chief and Council may declare a State of Emergency through a Band Council Resolution, and notify AANDC if such a declaration is made.

When a First Nation declares a State of Emergency, it signals their need for assistance.

Fort William First Nation is not a part of Nishnawbe Aski Nation, but is a part of the Robinson Superior Treaty.

The declaration of a state of emergency signals to officials at Aboriginal Affairs that help is needed. 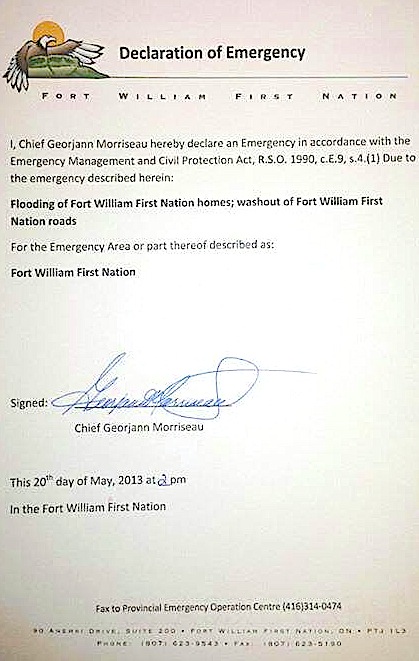 NEWS AT THE SPEED OF THE INTERNET ©