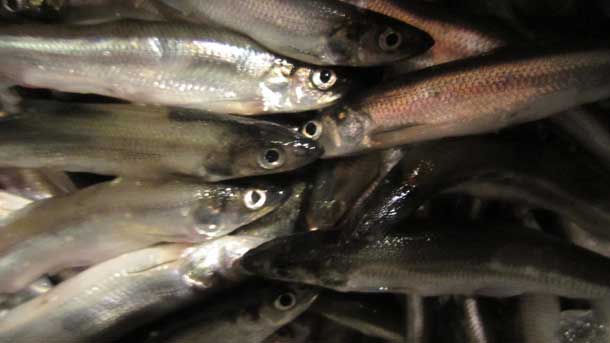 THUNDER BAY – It was a record breaking season for avid Thunder Bay smelt fishing enthusiasts as the annual smelt fishing season officially opened this week. Avid fishermen were raving and in awe of the large number of smelt fish that were overflowing in the Mackenzie River last night.

“Last night was the best smelt fish that we have ever seen in the history of Thunder Bay fishing” said  Frank Liparota who has been participating in the annual tradition since he was 7 years old. “I have never seen so many smelts in my life. You have to go back to the early 1960’s to recall a time with such abundance. We filled a 5 gallon drum of fish in less than 5 minutes. In every scoop we had over 50 to 100 smelts and were all done in less than 5 minutes”.

The amazing smelt fishing season was partly due to the perfect fishing storm. The long delay of winter and the freezing ice that was jamming our harbor and river mouths for the past month had caused a backlog of fish inside Lake Superior that broke like a dam of fish once the warm weather rapidly thawed the ice jam causing hundreds of millions of smelts to enter the McKenzie river all at the same time.

Local fishing expert Dennis Torich said “There was so many fish that you could catch the smelts with your hands. We could not see the river bed due to the large amount of fish.”

“I remember seeing this when I was a kid in the 60’s when my dad took me and my brother for the annual smelt fishing tradition. But we thought this tradition was almost gone”.

“The last few years we spent 2-3 hours catching a very small amount of fish. It took hours and we would never fill one 5 gallon pail. Now, this year we filled 3 huge pails in  less than 10 minutes. Never seen so many smelts in all my life,” added Torich.

are going again tonight just to take some videos and enjoy the atmosphere. “We need to record this because we may have to have proof since future generations will never believe us if we tell them what this fishing was like back in the day when the rivers overflowed with smelts. We may never see this again in our lifetimes,” continued Torich.

“If you are thinking of going smelt fishing tonight McKenzie, Current River, and McVicars Creek are 3 of Thunder Bay favorites,” shared Torich.

Ready to Launch Your Trip on the Superior Rocket?