THUNDER BAY – Attawapiskat residents are headed home. Flood conditions that led to the evacuation of several hundred people from Attawapiskat are headed back to the community after a stay in Thunder Bay.

The City of Thunder Bay in a statement says, “Residents of Attawapiskat First Nation that were evacuated to Thunder Bay earlier in the week are scheduled to return home Thursday, May 16. Although subject to change, the first flight is scheduled to leave Thunder Bay around 9 am. Additional flights will take place throughout the day to transfer the remaining evacuees.

At the request of the Minister of Aboriginal Affairs and Northern Development Bernard Valcourt, Parliamentary Secretary Greg Rickford, the Member of Parliament for Kenora, met with Attawapiskat First Nation evacuees in Thunder Bay.

During his visit with the Attawapiskat First Nation members, Mr. Rickford acknowledged that this is a challenging time for them and all other communities affected by flooding this season. He also told the community members that once the immediate emergency is over the government will work with the First Nation and province to expedite their safe return home.

Mr. Rickford indicated that he was very pleased with the coordinated efforts of the federal government, the province, the city of Thunder Bay, and the First Nation to meet the immediate health and safety needs of the evacuees.

Mr. Rickford thanked the community members for taking the time to meet, and share their experiences, with him.

While prior commitments prevented His Worship Keith Hobbs, Mayor of Thunder Bay, from joining Mr. Rickford, Mayor Hobbs did say:  “We are pleased with the federal government’s support, their quick response to the situation and the professionalism of staff on the ground.” 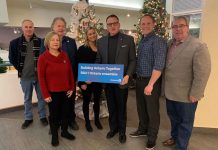