THUNDER BAY – Crane collapse recovery is continuing. Crews are working into the evening in the downtown South Core this evening at the Court House. Thunder Bay Hydro has the power off for the area, including the north side of Brodie Street, and for businesses along the north side of the Victoriaville Centre. Work crews have cut off a part of the crane boom that collapsed this morning.

Work on the crane, cutting off the broken boom has been ongoing for hours. It took four hours to prepare and then cut off the front part of the boom. 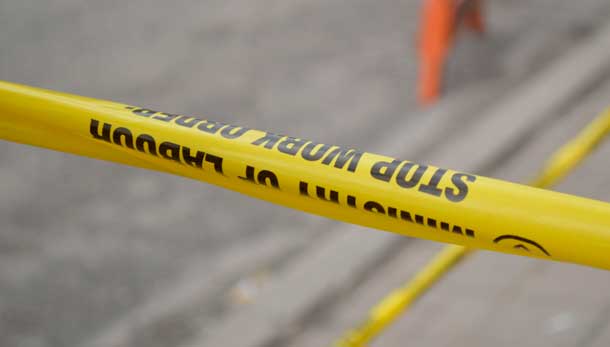 The Bargain Shop, Newfie’s Pub and Robin’s Donuts, the Victoriaville Medical Clinic and the Lake Superior Art Gallery were all impacted by the power outage.

At 18:00EDT, the crane has been stabilized by another crane. The next stage of the recovery operation is underway. Power is off to ensure that there are no problems if the crane were to fall or impact the transformer box. 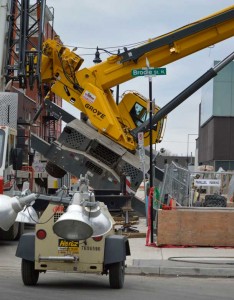 Thunder Bay Fire Rescue is on site, at the job site that has been surrounded by yellow tape from the Ontario Ministry of Labour closing the job site.

It is estimated that four to five hours at the least will be required to complete the operation.

At the site speculation is rampant over what caused the accident this morning. It appears that the ground under the crane gave way, causing the crane to tip forward. If that is the case, the investigation will likely include the road construction on the newly restored roadway.

There were no injuries as a result of the incident. Damage to the crane boom is extensive.

Security is on site keeping people from getting too close to the scene.

The lights have been brought on site suggesting that planning to get the laneway cleared could be ongoing into the night.