THUNDER BAY – The Sachigo Lake Walkers have arrived in Thunder Bay. The youth have walked 1000 kilometres to Thunder Bay from Sachigo Lake First Nation. The youth are seeking to raise money and awareness for the Dennis Franklin Cromarty Student Living Centre.

A week ago, in Sioux Lookout at a rally the students expressed that when they arrived in Thunder Bay they wanted to go for dinner with Thunder Bay Mayor Keith Hobbs.

The students were fuelled on their walk along the highways of Northwestern Ontario primarily by sandwiches. The youth wanted to meet with the Mayor and have a dinner with him.

Tonight, that dinner happened, and the Youth Walkers enjoyed dinner at Montana’s with Mayor Hobbs.

On Monday, at 2PM the former DFC students and friends will be welcomed at a Celebration Event that will be held at the Dennis Franklin Cromarty High School in the school’s gymnasium, 315 Edward St. N.

Their accomplishment will be recognized and fundraising efforts for the Student Living Centre will be highlighted.

The task of raising the funds needed for the Public / Private partnership to build the Dennis Franklin Cromarty Student Living Centre is continuing.

The partners in the effort are the City of Thunder Bay, Confederation College and Wasaya Group Inc.

Funds have come from many of the First Nations across Northwestern Ontario.

The federal government through the Aboriginal Affairs and Northern Development as well as the Ontario Government have yet to announce their support for the effort.

As both levels of government have expressed the importance of Aboriginal youth to have the needed skill sets and education to realize their full potential it is likely only a matter of time.

The need for a safe place for youth from the far north who come to Thunder Bay has been fully demonstrated by the number of Aboriginal youth coming to Thunder Bay for high school and returning home in a coffin.

Ontario Regional Chief Stan Beardy comments, “During that time period, no other young person in the city died under similar circumstances”.

“Why is that?” questions Regional Chief Beardy.

“It has created concerns in the Northern communities, not unlike the families of Canadian soldiers who have gone to Afghanistan to fight. The families are questioning if their young people headed to Thunder Bay are going to return home, or survive,” continued Regional Chief Beardy.

Click on the Poster to Support the DFC Student Living Centre 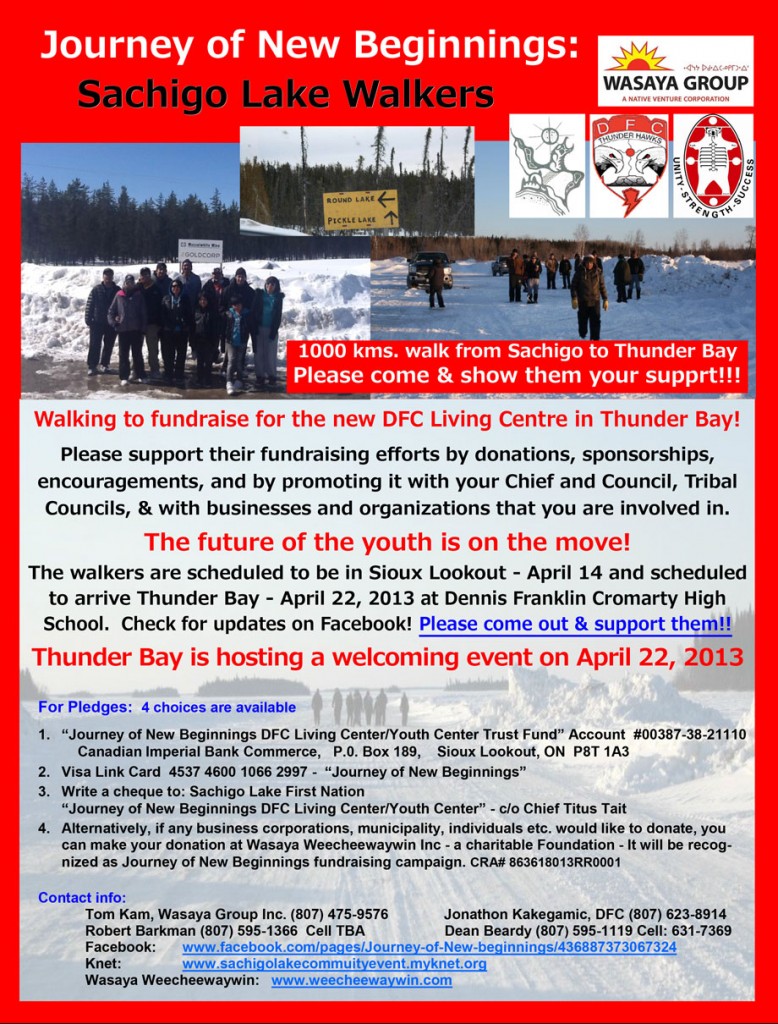