VATICAN – “The first order of business of the eighth General Congregation, which met yesterday evening and in which 145 cardinals participated, was to vote on the date to begin the Conclave. Cardinal Dean Angelo Sodano, expressing the wishes of all and after having consulted with the Cardinal Carmelengo Tarcisio Bertone, S.D.B., regarding the preparations at the Domus Sanctae Marthae, proposed the date of Tuesday, 12 March. The overwhelming majority immediately voted in agreement,” reported Fr. Federico Lombardi, director of the Holy See Press Office.

“There was no difference of opinion between the cardinals and the percentage of votes in favour of to those against was around 10 to one. Moreover,” Fr. Lombardi added, “the full complement of Cardinal electors was already reached and it was no longer considered necessary to wait further, as they already had time to reflect on their decision.”

During the ninth General Congregation that met this morning, the cardinals spoke about moving into the Domus Sanctae Marthae, which will be their residence for the duration of the Conclave. “It was agreed by majority that the move will take place on Tuesday morning, beginning from 7:00am, that is, the same day that the Conclave begins. A “Pro eligendo Romano Pontifice” Mass will be celebrated by the Cardinal Dean at 10:00am that morning in St. Peter’s Square. Rooms were also assigned, by lot.”

“This morning 17 cardinals intervened, speaking on the same general themes that have been previously reported, including: expectations regarding the new Pope, activities of the Holy See and its Dicasteries, and improving the Curia. In total, there have been 133 interventions in the General Congregations and, keeping in mind those scheduled for Monday, that number will probably reach 150.”

At the end of the press conference, the schedule for the sessions of the Conclave was presented. On Tuesday at 3:45pm, the cardinals will move from the Domus Sanctae Marthae to the Pauline Chapel in the Apostolic Palace. At 4:30pm, the cardinals will process from the Pauline Chapel to the Sistine Chapel and, after they have all taken the oath, the Master of Papal Liturgical Celebrations will give the order “Extra omnes” for all those not taking part in the Conclave to leave the Sistine Chapel. The cardinals will listen to a meditation given by Cardinal Grech, concerning the grave duty incumbent on them and thus on the need to act with right intention for the good of the Universal Church, after which they will proceed to the first vote. At 7:00pm they will pray Vespers and, at 7:30pm, will return to the Domus Sanctae Marthae.

Beginning on Wednesday, 13 March, the cardinals will move from the Domus Sanctae Marthae to the Pauline Chapel at 7:45am where, at 8:15am, they will celebrate Mass. At 9:30am they will enter the Sistine Chapel, pray the Liturgy of the Hours, and proceed to the voting process. Around 12:00pm they will return to the Domus Sanctae Marthae and, after lunch there, will go back to the Sistine Chapel at 4:00pm where they will pray briefly and resume the voting procedure until 7:00pm.

This coming Monday, 11 March, all the auxiliary personnel needed to ensure the smooth operations of the Conclave will take the oath of secrecy and those images will be broadcast by Vatican Television and Vatican Radio.

Since there are two votes each morning and afternoon, Fr. Lombardi stated that the ‘fumata’ (smoke signalling the election or non-election of a pontiff) that is produced from the burning of the ballots from those two voting processes could be expected around 12:00pm, in the case of the morning, or 7:00pm, in the case of the evening, unless the first of the two votes produces an election. In such an instance, the “fumata” would obviously take place earlier.

The Director of the Holy See Press Office also recalled the procedure in the case that a pontiff is not elected in the first four days of voting. In such an instance the cardinals will take a pause on the fifth day in order to pray, speak freely among themselves, and listen to a brief exhortation given by the senior cardinal in the Order of Deacons.

The scrutinies will proceed in a similar fashion—two days of voting with every third day taken to pause for prayer—until the 34th vote on the afternoon of the eleventh day. In such an event, No. 75 of the Apostolic Constitution “Universi Dominici Gregis” modified by Benedict XVI’s recent “Motu Proprio” would apply, which states: “If the balloting mentioned in Nos. 72, 73, and 74 of the aforementioned Constitution does not result in an election, one day shall be dedicated to prayer, reflection and dialogue; in the successive balloting, observing the order established in No. 74 of the same Constitution, only the two names which received the greatest number of votes in the previous scrutiny, will have passive voice.

There can be no waiving of the requirement that, in these ballots too, for a valid election to take place there must be a clear majority of at least two thirds of the votes of the Cardinals present and voting. In these ballots the two names having passive voice do not have active voice.” That is, the two candidates with the greatest number of votes will be voted for and cannot themselves cast a vote.

Fr. Lombardi reported that the commission that, under the direction of the Camerlengo, is responsible for sealing the entrances to the areas of the Conclave and carrying out the other operations necessary for the safeguarding of the Conclave was established. It is led by the Cardinal Camerlengo and among its members are the Substitute of the Secretariat of State, the Commandant of the Swiss Guards, members of the Gendarmerie, and notaries.

Finally he reported that the Pope’s Fisherman’s Ring—which exists in two forms, the ring itself and as a stamp used to seal documents—as well as two stamps—a larger and a smaller one—and the master lead seal of the pontificate were all destroyed, the images scratched out in the form of a cross to render them useless. The next Pope’s ring will bear the same image of Peter casting his net but, naturally, will have the new pontiff’s name inscribed above the image.

It was also communicated that tomorrow, Sunday, 10 March, various cardinals will celebrate Mass at their titular churches, inviting the faithful to pray for the Church and for the election of the new pontiff.

Vatican Weighs in on Gaza War 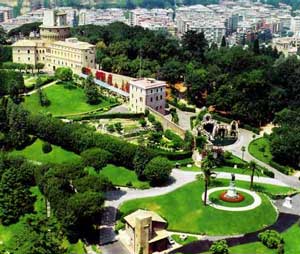