SAULT STE MARIE- Crime – Sault Ste Marie Police have a policy of reporting what happens in their community to the public. Police in the Soo report, “On March 7, 2013 officers were called to a theft of gasoline valued at $72.62 from the East Side Husky”.

“After receiving a description of the vehicle officers observed a vehicle matching the description west bound on Trunk Road. Officers followed the vehicle to confirm the plate they were given.  The cruiser lights were activated to conduct a traffic stop. The vehicle did not stop and after a short pursuit the driver of the vehicle lost control at the intersection of Black Road and Second Line East”.

“The vehicle ended up in the ditch on the north side of Black Road.  At Approximately 2:04 am the driver of the vehicle was arrested for theft under $5000, flight from police, dangerous operation of a motor vehicle and possession of a controlled substance,  (marihuana).  The accused will appear in bail court on March 8, 2013 at 10:00am”.

Also on March 7th at 12:30 pm outside of a business on Bay St. a 22 year old male assaulted his ex-girlfriend by grabbing her arm and striking her with a bag with a hard object in it. The victim received minor injuries in the assault. Patrol Officers located the male at 5:40 pm at a residence in the central part of the city and arrested him. The male in this domestic incident has been charged with Assault and Assault with a Weapon. He will appear in bail court on March 8th at 10:00 am.

On March 5, 2013, police received a complaint of assault that had occurred earlier in the day at Macs Mart, 271 Dacey Road.  It is alleged that the accused age 17, assaulted the victim by punching the victim repeatedly. The victim received minor injuries. On March 7, 2013 the accused turned himself in at the police station. The accused will appear in court on April 9, 2013 at 9:30am. 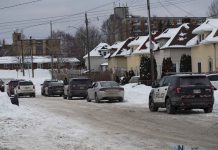 Police Arrest Suspects in Series of Break and Enter Incidents