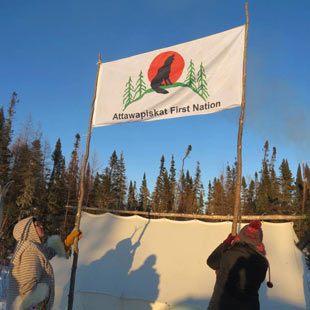 ATTAWAPISKAT, THUNDER BAY – Attawapiskat ice road blockade is continuing. De Beers Canada is still unable to access the Victor Mine 90 kilometres from Attawapiskat. De Beers Canada states, “On Friday afternoon, we obtained an injunction from the court prohibiting anyone with notice of the order from interfering with our immediate and non-obstructed access and the use of the winter road leading to our Victor Mine”.

Tom Ormsby, a spokesperson for De Beers says, “This means the blockade must cease immediately”.

The company says, “Anyone who continues to maintain the blockade is acting in contempt of court and is at risk of arrest”.

The Attawapiskat First Nation protesters who are blocking the road, do not seem to be too concerned over the risk of being arrested. The sign with the injunction has been tossed into the woods.

“The court ordered that the sheriff with the assistance of police do all things reasonably able to be done to prevent or stop breaches of the order, including the removal of persons or vehicles,” added Ormsby.

De Beers states, “While the mine is still operating at this time, the window to deliver the supplies to the mine is quickly closing and as a result the ability of the mine to be able to safely maintain operations is becoming increasingly impacted.


“At this moment, we are exploring all of our options including putting the mine on care & maintenance and even closure. As you can appreciate, this is hugely concerning for our employees, our local business partners and De Beers Canada”.

Contrary to some public reports, we have not been negotiating any agreement with the community. We are maintaining an open line of communication in the hope of hearing the blockade has been removed and that our convoys will have safe and uninterrupted access to the road for the remainder of the winter road program.

The issue appears to be over the Impact Benefit Agreement or IBA.

There is a contrast between what the protesters are wanting, and what De Beers is now stating – that there are no talks or negotiations.

At a meeting of the Chief and Council of Attawapiskat on November 3, 2005, the council voted unanimously in favour of signing the agreement. In a telephone call to Jeremy Wyeth, Vice President of the Victor Project, Chief Mike Carpenter of Attawapiskat said: “We look forward to working with De Beers as the Victor project progresses and produces Ontario’s first diamonds. While we are concerned about the impacts of the project and the changes it will bring to our community, we are confident that the agreement will be implemented in the spirit of partnership that we have established with De Beers Canada.”

“De Beers is honoured to receive the support of the Attawapiskat First Nation through the signing of this historic agreement. It is with heartfelt satisfaction that I can say this agreement captures the commitments which have been made by the company and the community to work together,” said Jeremy Wyeth.

The agreement sets out how the community will benefit with respect to employment and business opportunities, training and education, sound environmental management and financial compensation for loss of the use of the land while it is being mined.

“Through the years De Beers and Attawapiskat have demonstrated a willingness to work together in an atmosphere of mutual respect. This Impact Benefit Agreement is the result of commitment and dedication on the part of the community and the company to reach an understanding which will ensure mutual benefit and marks a significant step in our relationship,” said Richard Molyneux, President and CEO of De Beers Canada.

The Victor Mine is located in the James Bay Lowlands of Northern Ontario, approximately 90 km west of the coastal community of Attawapiskat First Nation. It is Ontario’s first diamond mine and the second in Canada for De Beers.

The Victor Mine is an open-pit mine and is one of 18 kimberlite pipes discovered on the property, 16 of which are diamondiferous.

Construction of the Victor Mine began in February 2006 after receiving all necessary approvals from provincial and federal governments.

Approximately $1 billion was spent on construction of the mine, with approximately C$167 million spent with Aboriginal businesses or joint venture partners. It is also estimated that De Beers will contribute C$6.7 billion cumulative GDP impact for all of Ontario during the life of the Victor Mine.

All images except the De Beers trucks headed to the community were supplied by the people from Attawapiskat with the sincere thanks from the team at NetNewsledger.com © on all images remains with the photographer. No use without permission.