THUNDER BAY – At tonight’s city council meeting, the following eight individuals and groups were recognized and awarded as recipients of the 2nd Mayor’s Community Safety & Crime Prevention Awards, presented this evening by Tbaytel and the Thunder Bay Crime Prevention Council at the Committee of the Whole meeting. “The awards are a way to promote the attitude and belief that crime prevention is each citizen’s responsibility and to celebrate our success stories,” said Mayor Keith Hobbs. “I want to congratulate each of the recipients on a job well done and I hope others will follow their example to make our city a safer place to live.”

The City of Thunder Bay has made community safety and crime prevention top priorities to enhance the quality of life for all residents. These recipients have shown outstanding effort that contributed to making Thunder Bay a safer place to live.

Community Hero Award – Sharon Johnson is being recognized for her commitment as the key organizer of the Full Moon Memory Walk. The memorial walk started in the spring of 2005 to honour and to remember missing and murdered Anishinaabek and Métis women in Thunder Bay and Northwestern Ontario. “We can remember them for the beautiful women they were” is the motivation that drives Johnson who’s 18 year old sister Shannon was found murdered in 1992. The case remains unsolved. The Native Women’s Association estimates that there are more than 500 missing or murdered Aboriginal women in Canada, 40-50 of those from the Thunder Bay region.
Sponsor: The Simpson Street Business Improvement Area.

Business Award – The Northern Woman’s Bookstore and its team of volunteer staff play a fundamental role in crime prevention by empowering women in Thunder Bay and Northwestern Ontario for close to thirty years. The feminist-run bookstore has an outstanding reputation in the neighbourhood and the broader community as an informal ‘safe space’ for women experiencing violence at home or on the streets. Women who are experiencing violence know that they can come to the Bookstore and the staff will help them both deal with their immediate trauma and assist in navigating the services available to them in the community. Margaret Phillips, the Bookstore’s co-founder has also been a tireless advocate and educator for women’s issues, particularly those specific to Aboriginal women and women of Northern Ontario.
Sponsor: Brook McIlroy.

Media Award – The Biindigaate Indigenous Film Festival is acknowledged as a form of media that shapes the way we understand the world and our place in it. As the only Indigenous people’s film festival in the region, Biindigaate plays a pivotal role in changing perceptions of Aboriginal culture to better reflect its strengths, breadth and diversity. The Festival provides a unique opportunity to use artistic media to bring people together with the goal of fostering a stronger community. Building on the strong tradition of storytelling, the festival also gives aspiring and established artists a venue to exhibit contemporary incarnations of this custom.
Sponsor: Shout Media.

Education Award – Julia MacArthur, The Other 10%. The Other 10% is a group by and for lesbian, gay, bisexual, transgender, two-spirited, intersex and queer youth (LGBTTIQ) that provides the kinds of protective factors needed to make Thunder Bay a safer city for everyone through education, awareness, and community building. Acceptance—regardless of your sexual or gender orientation— is the driving force behind the youth network. Recognizing the range of stress factors that can affect LGBTTIQ youth, and the need for a safe gathering space, Julia MacArthur led the creation of The Other 10%. Prior to the group’s existence there was no established place for LGBTTIQ to gather and connect in Thunder Bay. MacArthur and her colleague Betsy Martin run the drop-in group for youth 12 – 25 years of age.
Sponsor: Métis Nation of Ontario.

Youth Leadership Award – Reena Legarde is an active youth leader promoting ways to deter drug and substance abuse in our community through initiatives that have both a local and national focus. In her volunteer position as the Chair of Canadian Students for Sensible Drug Policy (CSSDP), a national grassroots network comprised of youth and students, she looks to address drug and substance abuse problems through education and communication with her peers. Looking at the root causes of addiction and drug abuse as a social and health issue rather than a criminal problem, Legarde is currently working on a drug policy conference with Fort William First Nation. The goal of the conference is to empower the aboriginal community to develop policies and programs that will address the drug and substance abuse.
Sponsor: Union Gas.

Enforcement Professional Award – Constable Julie Tilbury is being honoured for her work behind the scenes that makes her an exceptional member of the Thunder Bay Police Service. Passionate about the people she serves, especially the more vulnerable members of our city, Julie knows that empowering individuals and building on the strengths of our diverse communities is the best way to make Thunder Bay safer for everyone. Julie, familiar to all of us as the face of Crime Stoppers, is very involved in community projects related to community safety. She also contributes countless volunteer hours notably her involvement as the coordinator of the 2011 Special Olympic Winter Games in Thunder Bay, an event that had a huge impact on our community.
Sponsor: Apex Investigation & Security.

Outstanding Community Project Award – The Community Coalition Unified for the Protection of Our Children and Youth (CCUPCY) is a coalition of concerned citizens and organizations working together to make a safer place for children and youth in our community. CCUPCY has been active in the city for over 12 years, hosting well-known community events such as Paint The Town, Fall Harvest and Spirit of Winter. Each event encourages fun, positive engagement for participants, providing opportunities for young people to connect with, and contribute to their community. CCUPCY is the epitome of collaboration: members come from educational institutes, community elders, service agencies, law enforcement and justice, treatment centres, youth organizations and the community at large.
Sponsor: The Thunder Bay Police Services Board & The City of Thunder Bay.

Outstanding Community Project Award – The Community Action Group (CAG) is taking great strides to build community between the young and old in the Windsor/Picton/Blucher neighbourhood. In just over a year, CAG has already made a tremendous impact through partnerships with Alpha Court, Katimivik, Thunder Bay Housing and others. CAG’s accomplishments include publishing a newsletter, hosting community feasts, neighbourhood clean-ups, and a road hockey tournament. Regular organized events bring neighbours together to have fun, create community pride, and develop respect for each other and their neighbourhood. Steve Mantis and Alana King, co-chairs of CAG know that the simple act of bringing people together toward a common goal is the first step to creating a positive family atmosphere.
Sponsor: Wasaya Airways LP.

Each Outstanding Community Project received a $1,000 award from their sponsor to be used for future safety initiatives.

Criminals Target People Away from Home for Holidays and For Funerals 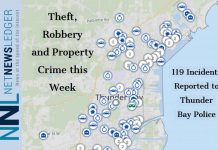 Prevention is a Great Cure for Property Crime 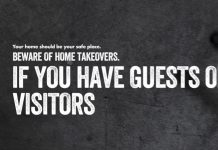 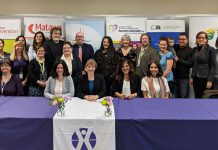