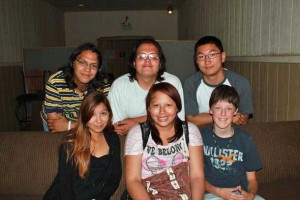 THUNDER BAY – The Regional Multicultural Youth Council are going to be talking to the school boards this week. The students will be presenting the findings from a survey that the RMYC completed with students at schools across the community. The surveys were completed earlier in the school year, and the students are presenting their solutions to the problems. The solutions are from the surveys that students at each of the high schools identified for the problems that they see at their schools.

Each school will be presenting the situation report to the school boards, and then later to the public.

Hammarskjold presents that there are several good things happening at the school. they include the Aboriginal classes in Ojibway and that for many of the Aboriginal students, the teachers are expressing interest in what it is like in their home communities.

However the problem of drugs at Hammarskjold remains an issue. Students reported, in the survey that students are using, and in some cases selling marijuana on school grounds. Some students are concerned that fellow students are smoking marijuana in the hallways. Greater supervision was sought as one solutions.

There needs to be teacher training to get students and teachers talking with each other to seek solutions.

Appearance was also raised as a concern as students are focused on their appearance, and weight.

For solutions, there should be a marketing campaign in the school to show students that there is more to their attendance at school than appearance.

At Hammarskjold, when it comes to Aboriginal youth most students did not want to fill in the survey. Most kids are judgmental, on each other, and many youth continue to follow stereotypes.

A main focus issue at Churchill is that of of homophobic prejudice, and that many students using homophobic slurs toward students and teachers. Students express that these slurs are replacing those terms.

The solution is thought to be an assembly and that teachers should have more efforts in place to deal with homophobic issues. When students don’t have what they feel is the support.

Racial discrimination and homophobia is the same issue according to students. Churchill Students said that awareness, consequences and inclusion are solid solutions that should be implemented.

The solution is seen in having good friends and a strong support network.

School uniforms are also seen as a solution at Westgate. The idea was that it will also be a way to increase school safety.

One issue that students raised is that of a perceived unfair solution process to problems.

There is a speed to judgement by teachers and staff to resolve conflict. Students who have the nicest clothes, or the higher grades are treated better than others.

The solution would be having a third party system put in place to solve the problems. The longer term solution was that students at the new Lakehead University Law School be able to help by serving as judges.

A situation where a student who has been bully others and because of his marks and standing in the school in terms of popularity he is able to get away with the bullying.

St. Patrick High School students express that there are issues of bullying, and drug abuse and use at the school are an issue that students said that they want to see addressed. One of the solutions expressed by students was that prevention, not punishment should be one of the goals.

There are ways that teachers could engage with students and prevent drug use. Drunkenness and students getting high especially at lunch is an issue

Weight is a huge issue. Students are belittled for being overweight and there is incidents of bullying over that issue. A good solution would be to have inclusive days. For example instead of the issues with weight having an open gym.

There is a good spirit at St Pats. There should be an orientation program for the school as new students are often left to fend for themselves.