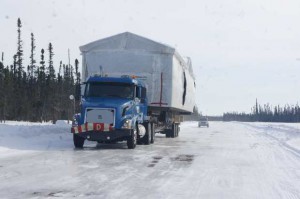 THUNDER BAY – Editorial – The housing crisis that led to Attawapiskat First Nation declaring a state of emergency, and then to the federal government putting the community into third party management might be over. It really depends on which side of the argument one is hearing. However it is likely, unless the Government Manager ordered in building materials that have already arrived in the community via the winter roads, the ability of the community to fix homes this summer will be severely restricted.

The true test to determine success in this situation will be if the Third Party Manager ordered in the plywood, drywall, and other construction materials needed to repair homes in the community this summer.

It would be my thought he might not have ordered those likely much needed supplies, but time will tell. There was little co-operation between the Chief and Council and the Government manager. The ability for the manager appointed by the Minister to make decision was likely limited by his ability to work with the Chief and Council. The anger is still there, as Attawapiskat is still continuing legal action against the Government over the issue of imposing a third party manager on the community.

Is Attawapiskat Housing Crisis Over? Only the Third Party Manager knows for sure right now.

When one reads through the documents shared openly by the Attawapiskat First Nation, one can see that it is likely the roots of last year’s housing crisis were at least a year in the making. In the North getting building supplies is not the same as in the south. Materials have to come in on the winter roads, or be flown in to the communities. The cost of flying in commodities such as drywall and plywood are very high.

Understanding what happens in these Northern Communities appears harder than it should be. Even the Prime Minister did not seem to fully understand the issue. On November 29, 2011 speaking in the House of Commons, Prime Minister Harper said, “Since coming to office, this government has spent some $90 million just on Attawapiskat. That is over $50,000 for every man, woman and child in the community. Obviously, we are not very happy that the results do not seem to have been achieved for that. We are concerned about that. We have officials looking into it and taking action”.

If there was concern, then that concern might well have been with officials at the Ministry of Aboriginal Affairs. As a community in co-management, all financial decisions had to be approved by the Minister and his officials. That the Prime Minister took all the funds including education funding over five years and lumped it all together speaks to that difficulty in understanding the real issues.

In fact if you read through the financial statements, and court documents on the Attawapiskat First Nation website, the efforts to secure the 22 mobile homes for the community were underway before the Government manager was put into place. The financial statements since 2005 are also all online.

If you choose to believe Charlie Angus, the efforts of the “Indian Agent Dude” as Angus often dubbed that manager, actually slowed progress on getting the sites prepared. It was De Beers rather than the Government’s manager who did the heavy lifting in preparing those sites for the mobile homes.

The speaking points presented by the Harper Government led to many people making the assumption that ‘Something is rotten in the state of Attawapiskat’. All it took was reading some of the comments on news sites, editorials, and letters to the editor on media sites across Canada to witness how that assumption led to increased anger.

Is Attawapiskat perfect? Likely not.

But name a community that is? Put into context of some of the swirling controversy around the federal government right now over the cost of fighter jets, the robo-calls, and other issues, and maybe third party management should be put into place at the federal level?

The real story is likely that as the third party manager dug through the paper, nothing of serious concern was found. In fact the Minister himself is saying that the management of the crisis is such he can pull the third party manager out of the community. Despite loud noises about audits and financial mismanagement the Minister is now seeking to re-build the relationships between his department and Attawapiskat First Nation.

It is likely now, that re-building that relationship is going to take a lot of work.

Chief Theresa Spence says, “Contrary to recent public statements by the Minister and Departmental officials, the Third Party Manager’s decisions since his appointment have caused repeated disruptions and hardships to the orderly functioning of basic community services. The failure to pay post-secondary allowances to students at a critical time in their studies was simply the latest in a series of failures by the Third Party Manager to administer the First Nation’s funding responsibly” said Chief Spence, pointing to examples including:

What Canadians will likely find out six to eight months from now, and likely without a great deal of fanfare, is if the Government’s manager, who primarily operated from Winnipeg, had enough information to get supplies in to Attawapiskat for repairs to homes this summer.

If he did, it is possible there will not be a similar crisis next year. Should he have failed to bring in needed supplies this winter, the roots of another crisis will have been planted.